The Hospital by Keith C. Blackmore 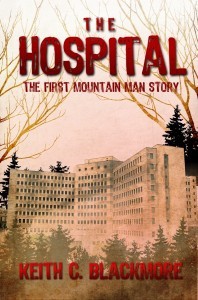 I downloaded this a million years ago but finally got around to listening to it today. It was terrifying, so disturbingly good and it is still Free on Audible. It’s only an hour and ½ long so you’ll get through it in no time at all. Go get it.

Apparently this story is a prequel to a series of books set in this same zombie apocalypse stricken world. Or maybe it’s just set in the same world. I don’t really know. What I do know is that you don’t have to read the others before listening to The Hospital. It completely stands alone and is completely creepy.

Gus is the protagonist. He is just a regular guy trying to stay alive and avoid becoming dinner for the walking corpses. He was a big guy when things went bad and even now, half starved, he’s still got a good bit of meat on him. He’s bald, he spits, he drinks too much booze and he has stinky accidents in his pants like any normal scared-out-of his-wits person would in this situation. What’s not to like?

Anyway, this story follows Gus as he loots a hospital. He’s rather surprised by how much good stuff is just lying about but he doesn’t think too hard on it. He’s just thankful he’s found it. He’ll regret this later, after he loses a little of his meat  . . .

This story was short but it packed a gruesome punch. Gus ends up finding more than he bargained for and what happens next is extremely horrifying and kind of funny, if you're strange like me.  I won’t forget this one anytime soon. The narrator was perfect for the part and did a fabulous job with Gus and the one other character. This is good gory stuff and I hope to revisit this author and Gus again.

And if’n you are one of those who must know the spoiler and decide to click below don’t be blaming me if you never sleep again.