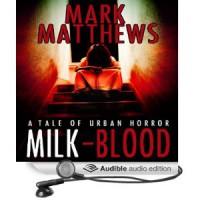 Milk blood is a bleak, unflinching look at people in desperate situations. When I say bleak, I am not exaggerating. These people are more than down on their luck, they have hit rock bottom. It’s a gripping mix of the horror show that is drug addiction and otherworldly horror that feels so natural your skin may crawl. It’s descriptive and gut- wrenching and some truly terrible things happen to an innocent young girl. You might want to have something upbeat nearby because some of these scenes may wreck you. Unless I’m just getting wimpier as the years go by. Nah. I don't think that's it.

I listened to this story in its unabridged audiobook format which immerses you in the desolation of the story. The narrator is deadly serious (as he needs to be) and, to be honest, though it’s only 3 hours or so, I had to take breaks and listen to some silly horror podcasts in between. This story is intense and bothered me on a level that most horror can’t reach. It’s similar to Lynda Barry’s Cruddy in that way. Only without the humor. There's nothing humorous here.

*I received a copy of the audio from the author.