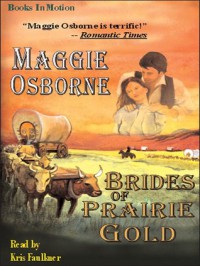 I read Brides of Prairie Gold as an unabridged audiobook narrated by Chris Faulkner. If you’re looking for a good bit of grit alongside your adventurous romantic entanglements you may want to track down a copy of the paperback. The narrator tries (too hard at times) but this book has an enormous cast and I think this one would’ve been better suited to a multi-cast of narrators. Many of the women end up sounding very similar and when they are hysterical, angry and screechy it’s hurtful to the ears.

I didn’t take notes so this is off the cuff, probably inaccurate and may make less sense than my typical review.

Set in the 1800’s, twelve women leave Missouri and head out on the Oregon Trail to become the mail order brides of men they’ve never met. So glad I wasn’t born back then . . . The trip is wrought with danger and disease and the man in charge tells them that at least one of them will not arrive alive. They go anyway. And, for the record, he wasn’t lying.

The story follows these women but only a few become main characters, thank the gods, as my head would’ve exploded from confusion. They slowly reveal the reasons they’ve chosen to take this difficult trek for what may probably be a difficult life and I found it all fascinating. They’re forced to work together (even when some of them despise each other) to survive. The trip delivers everything Cody promised in the way of danger and then some. They’re forever changed by what they’re forced to endure and become, for the most part, stronger women for it.

This story is rich with historical and character detail and it has a little bit of everything one could hope for in book of this kind. There’s action, the promised death(s), prejudice, clashes between the classes, rumors, forbidden romances, complicated and constantly evolving relationships between the women, unlikely friendships and alliances and even a psychopath to make me happy. If you want drama that isn’t overly dramatic you’ll find it here. I’m not overly fond of historical fiction of this kind but this book? This book I loved despite my issues with the narration. The story gets a 4.5, the narration a 3.