You by Caroline Kepnes 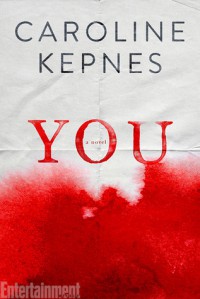 This is a little story about stalking.

You will LOVE it or you will HATE it. I don't think this is a book where you can fall somewhere in the middle. The protagonist is an unapologetic prick and his love interest is a self-centered jerk. They kind of deserved each other and I cannot lie, I kind of loved this book.

Joe looks like a normal, good looking fellow but looks are deceptive. Joe lives in his head way too much and Joe’s head sees a twisted reality. It is Joe who tells this story and Joe has perfected stalking. When a beautiful young woman walks into the bookstore where Joe works, he is smitten by her Natalie Portman essence and becomes Obsessed. He takes to the internet to google her name because, well, wouldn’t you? He then haunts her social media goings-on, steals her cell phone and quickly gets everything he needs to force her to fall for him and stalk her like the modern day maniac that he is.

Joe’s thoughts are often pretty scary. He is possessive, crude, hilarious, angry, love-struck, delusional and twisted. He will do whatever it takes and manipulates circumstances to get Beck to be his girl. Whatever it takes. And that’s all I’m saying about that. But Joe is also funny, insightful and spot-on with some of his thoughts on people and situations.

“People have to be careful or they wind up with lives they didn’t want.”

Beck is not a likable character so it’s easier to go along with Joe, even though you know his actions are so incredibly wrong. She is self-absorbed and an overgrown spoiled child who thrives on the attention of others, not caring who she hurts in the process as long she’s happy and admired by all. She’s also a bit of an airhead, if you ask me. She makes horrible choices when it comes to men, so much so that at times Joe almost seemed like a good option, LOL.

Joe is batshit crazy, there’s no way around it, but because the reader is always in his head and seeing the world from his skewed POV, you can almost understand why he acts the way he does. He needs some serious help, and though it’s all so deliciously wrong, I have to admit I mostly loved it. I was never bored or tempted to zone out. Should everyone and their granny read it? Probably not. It’s dark and disturbing and it delves into some ugly, hidden crevices that some will not want to visit.

With that said, I rate the actual story a five but can only rate the audio version of this story a four. The narration is fantastic. The voice is dark and sinister and love-struck and angry all within the span of a few pages but I was often left a wee bit confused because Joe tells the story in second person. Thus Beck is "You" and I often didn’t know if he was voicing something out loud or if it was only in his head. I think this would be a much better read in paper where you can see what the author intended.