All Our Yesterdays by Cristin Terrill 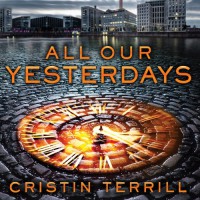 I’m going to keep this short and as sweet as I can because everyone seems to adore this story and sadly, I really didn’t. Before you beat me over the head with the fact that I am a moron who is too ignorant to follow a time-travel story, I have to say that I enjoyed both Stephen King’s 11/23/63 and The Time Traveler’s Wife so it wasn’t the time-travel bits that put me off. Those books worked for me because of the characters. Though this story has very strong characters and it was interesting to see how much Em changes as she matures, something about them just didn’t grab me enough to become emotionally invested in their story. I’m sure it’s a case of “it’s me, not you” and I’ll leave it at that.

Were I you and considering this audio I would recommend opting for the paperback instead. Something about the narrator’s tone, almost bordering on monotonous here and there, made it very difficult to get through and two of the characters, friends of Marina’s whose names escape me, were cringe inducing. One sounded like an insipid moron and the other sounded like some snooty old socialite with some sort of strange accent and I believe she was only 16 or so. The rest of the voices were decent but those two? Those two were truly awful. It's a good thing they only played bit parts or this would've been a DNF because the voices bothered me so much.

With that said, well, there's not much more to say. Everyone else loves it but I just thought it was okay.