A Rogue by Any Other Name by Sarah MacLean 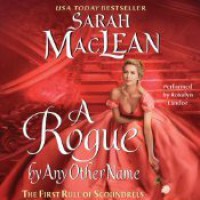 I listened to this book as an unabridged audiobook read by Rosalyn Landor. She does a fine rather snooty job with the narration which fits the historical setting and a fabulous job with the heroine but when it comes time to do to the manly voices I cringed a little. I would’ve much rather had a male voicing the guy parts but they didn’t ask me.

It’s been a bit since I’ve read a historical romance and this one had a lovely leisurely setup that introduced the relationship between childhood friends Michael and Penelope by letters they wrote when they were children and via flashbacks to their friendship. It gave me high hopes for the relationship to come.

As a young man, Michael lost everything in a moment of overeager stupidity and has spent the past decade working to reclaim what was once his. He disappeared from Penelope’s life and hasn’t been there when she’s needed a friend. Because her daddy wants her married off, and soon, he’s attached some very attractive land to Penelope’s dowry. Land that once belonged to Michael, land Michael will do almost anything to get back . . .

Can you see where this is going?

So yeah, Michael suddenly re-enters her life and pretty much steamrolls over it to get what he wants. He doesn’t seem anything like the Michael from the letters and that made me a little sad for Penelope who was so genuinely happy to see her old friend when they meet up again. But then he opens his mouth and ugly spew slips out and she’s not so thrilled. He’s changed and he’s a demanding ass who keeps secrets and strong-arms her into marrying him and then is all about The Revenge. He must get The Revenge! Even if it hurts those who love him.

Ugh. Ugh. And ugh. I don’t like this type of “hero”. Never will, I’m sad to say. He does eventually realize the error of his ways but it’s all a little too little, a little too late. I am not a patient gal so I can only give this one a three. The writing was great; there was wit, sensuality and Penelope was not a push over and I will read this author in the future but I can’t give this story any more than a 3 because of Michael. He is an ass, he knows he’s an ass at least, but that does not change the fact that he behaves like an ass for a majority of the story. His penchant for ass-holi-ness causes no end of conflict and though his fingers may have been magical, his nonsense had me wanting to do this.

“I’m going to turn you from light to dark, from good to bad. I’m going to ruin you.” She didn’t care. She was his. He owned her in this moment, with this touch. “And do you know how it will feel?” She sighed the word this time. “Splendid.”