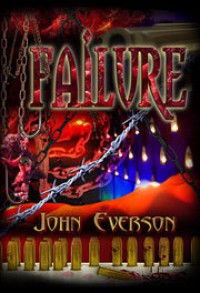 I received a copy of this audiobook from the publisher/author/narrator via Audio Book Blast in exchange for an honest review and that's what you're getting.

Failure follows three teens around as they momentously screw up their lives. It’s kind of fun to watch this disaster because, let’s be real, none of them are very nice people. The boys have no respect for girls and the girl has no respect for herself. But I’m not here to judge . . .

So, based on the promise of an epic high and some potentially epic sex, the three agree to meet and perform an occult sex ceremony for a kinky old guy who wants to watch (so he says). Even when he whips out the “pain chains” they don’t get suspicious. Nothing bad could possibly go wrong here, right?

The story is written in such a way that I thought it was a sequel. It’s told by various character points of view and it flips back between the days leading up to the ceremony to the present day situation and I was very confused in the beginning. Perhaps that’s due to my listening to the story on audio or perhaps it’s due to my limited brain power? I don’t really know, but it all began to make sense eventually. The narration is great. Joe Hempel sounds appropriately young for the characters, doesn’t give the females a creepy falsetto and he gives the old man the sinister vibe he deserved.

It was quick, brutal and gory but nothing new or groundbreaking. Just some ugly people doing ugly things and getting their comeuppance. It kind of felt like an 80’s throwback with sex crazed teens doing what they do and a plot that felt achingly familiar. Still, I kind of liked that about the book! 3 ½ stars