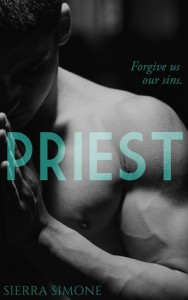 This story is not based in any sort of reality. If you know that going in you’ll likely be okay. But I make no guarantees.

Tyler is a handsome fellow who suffers a tragedy in his youth and later decides to become a priest. The way I read it (and I could have read it wrong), it seems he did this not because of any true calling but to prove some point to someone that all priests aren’t sexual predators and life ruiners. Umm, sure, okay. Why not just become a counselor and truly help the victims? This all makes little sense to me but why ask why, you know?  I suppose if he had gone that route the sex in Priest would’ve been less kinkier? So there is that and that is definitely something.

Sooo, when this studly guy in the priest outfit first spies luscious, ruby red lips through his confessional window, he’s aflame with a desire that will not settle down. He imagines all sorts of things he wants to do to those plump lips and they all involve his long neglected dingdong.  And then he sees the rest of her and both heads of his nearly explode. Fergodsakes, even her eye lashes send a rush of blood to his man parts! Really, guys, eyelashes can do that to ya?  So glad I’m not a guy.

He does his darndest to fight it.

He is a priest, after all, but she keeps coming around with those lips of hers and whoa are her confessions ever spicy and detailed. When he learns that

she’s been doing a lot of this in the booth

well, he is completely unable to resist. Who can blame him, really?

So, after much sating of the loins and anointing of the holy instruments with body fluids, their affair is threatened by a man from Poppy’s past.  Guilt, jealousy, avoidance, fear and no end of angst takes center stage.  Ugh, it exhausted me and I should’ve just skimmed to the end when I started to get annoyed because the more I learned about Poppy, the less I enjoyed the story. I suggest you do the same unless you’re really digging what you’re reading.

Poppy was a character I just didn’t get. She’s a poor little rich girl whose parents gave her the best and had her life mapped out for her. Sucks, I guess, but life could always be much worse.

After she graduates from her Ivy League college, her lover decides to dump her for another for the dumbest reason on the planet. Want to know why? I’m going to tell you anyway, Poppy, you see is  too much of a sex bomb. Her high class lover doesn’t want his co-workers/co-horts thinking about his wife that way! So he’s marrying someone boring. What the what? So it’s then that she decides to “break free” from her stifling, unhappy life on her own terms by becoming a stripper in a high end (but of course) club.

Girl, please. THIS is your tragedy and secret pain?  Get over yourself. Sorry, call me heartless (you won’t be the last) but I cannot find sympathy for you.

Priest is totally unrealistic and full of very dirty sex and if you are deeply religious this will no doubt offend you.  There’s not a lot of plot here to go around either. I was also not at all fooled by Tyler’s silly proclamations of love. He can’t fool me, I know he was just falling in love with her boobs and pink parts. This book is all about the lust and I kind of felt bad for him.

So although this started out spectacularly, by the midway point I felt like I had been dropped into a steamy Lifetime movie what with all of the dramatics and I kept waiting for someone to turn up dead. This drama was more than I signed up for. I just signed up for the taboo sauciness, really. I suppose it’s my fault. Still, I’d probably read most of another . . .