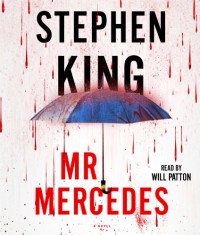 Will Patton reads this audio! It’s getting all the stars because I love the way that man tells a story.

The book begins with one jerk ruining the day of many because he can.

Things start out awfully when a maniac named Brady decides to drive a Mercedes into a crowd of innocent job seekers because he feels like it. People die. But Brady is not completely satisfied with his day’s work of murdering the innocent. Now he’s focused on tormenting the now retired officer who was unable to close the case.

Brady, who is somewhere in his 30’s, isn’t quite right in the head but is functional enough to work two jobs that still leave him ample time to play out his murderous scenarios. He lives with his drunken momma who he may love a wee bit too much but that’s none of my business . . .

What follows is a tense thriller, light on the horror, high on the suspense, with a wee bit of a quickie romance thrown in for maximum emotional impact. Gah, if you’ve read King before, you probably know how that ends and that’s all I’m saying. I’m more a fan of the horror than I am of the thriller but I very much enjoyed this story from beginning to end. It’s a little overstuffed with what seems like endless and pointless detail here and there but it all comes together very nicely in the end and the characterization is top notch. King most definitely has a way with the words and Will Patton reads them fantastically.

Come on, how accurate is that?!