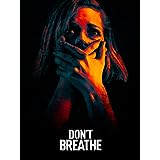 A trio of friends break into the house of a wealthy blind man, thinking they’ll get away with the perfect heist. They’re wrong.

Today, to change things up, I am reviewing a movie I actually enjoyed.
In Don’t Breathe, we have a trio of down on their luck teens stuck in a desolate, hopeless land where anyone with the means has already hightailed it out of there. These kids are too inexperienced and young to get real jobs, if there were any, and too desperate to leave town without cash so their solution is thievery. I know, I know but I kind of feel for two of them (one of them is just a dick but there always has to be one, right?). Their plan seems to be working out for them until they set their sights on a retired veteran who, they learn, is sitting on a big pile of cash he received in a settlement when his daughter was killed in a car accident. They think it’ll be an easy score, he’s old and he’s blind, they have a key and a remote that allows them to disable the security system. They figure it’ll be a breeze.
Whatever could go wrong here? Well, just about everything you can imagine and then some nightmare making things that you might not want to think too long and hard about.
This movie was excellent. It was tense and violent and surprising and I never spent a moment rolling my eyes or feeling bored. The sense of desperation is set up beautifully from the start with brief but painful looks into the bleak lives of some of these characters. Rocky, the main girl, had my sympathy the entire way. Her family life was dreadful, stuck with a mean-spirited mother; she only wanted a better life for herself and her younger sister. Everything in this movie looks dirty and worn out and the deliciously revolting twist, as nutty as it was, seemed to fit just fine into this world.
If you only go to one film in the theater a month, like I do, I’d say this one is definitely a worthy choice but please people don’t bring your kids. I beg of you. This is not a movie for the kiddies. My theater was filled with more kids under ten than adults. There was a three year old sitting next to me whose parent told her not to cry or they’d have to leave. WTF is wrong with people? And then there was the stupid mother who asked her preteen boy what part he liked best as they were leaving the theater.  And he says the
turkey baster
(show spoiler)  scene, naturally, and then went on and on about it as mom pats him on the shoulder and says that was her favorite scene too. I tell you, I have never been more creeped out or worried for humanity than I was at that moment.

Anyway, this was an excellent movie filled with suspense and resilient characters and a beautiful Rottweiler. Your sympathies and loyalties will change as the movie goes on and I loved that.
Horror Film