Lilyn from Sci-Fi & Scary wrote a great blog piece about her Scariest Horror Villains and so kindly asked me to share mine.  Because I am a lazy blogger, I am going to borrow her format.

I started watching horror movies like The Prophecy & The Exorcist at the drive-in when I was frightfully young so there isn't a lot that scares me nowadays but occasionally a villain has managed to wriggle their way under my skin.

This one is easy. The Cenobites from Hellraiser. They skin you alive and torture you and play a part in resurrecting your dead flesh. Could there be anything worse? That is something that made my 17 year old self shudder in fear. I'll never forget the first time I watched it. My boyfriend at the time was ghost white when we left the theater and I later learned that Hellraiser was his first horror movie. Ever. I had no idea. Can you guess who picked the movie? This was our first date too. I spilled steaming hot coffee in his lap during our second. Amazingly, that poor foolish innocent boy wasn't scared off and ended up marrying me a few years later.

Which horror villain used to scare you, but no longer does?

Hmmm, this one is tough. All villains, if done well, can still manage to creep me out but I have to agree with Lilyn here and go with vampires.They have just been done to death and romanticized to death and need to be given a rest from their life after death.

Bring back these kinds of vampires though and I'll change my tune real quick!

Has a horror movie villain ever affected your actions in real life?

Not that I can recall. I do remember being terrified that I was going to become possessed for years after watching The Exorcist and I always went to church like a good little girl because I was afraid of what might happen if I played hooky. This fear stuck with me well into my teens too. I was also very afraid to drape my legs over my bed, fearing monsters would get me, after viewing Don't Be Afraid of the Dark one too many times. I remember it being a creepy little tale of locked rooms and monsters who attack an unsuspecting couple who couldn't leave well enough alone. Now the trailer kind of makes me laugh.

What’s the scariest movie you saw in theatres?

I can't even remember. I thought it was The Exorcist but I was only 3 when that first came out so it's doubtful. My best guess is The Prophecy from 1979, followed closely by The Amityville Horror. 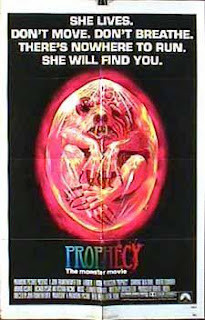 I remember being at the drive-in and being terrified those mutated things were lurking around every dark corner and were going to get me.  Ah, such great times.
Zombie, Vampire, or Werewolf – Which one would you rather fight?
I'd like to think I could easily tame the werewolf with a little raw meat along with some kind, loving quiet talk. They're just overgrown puppies, right? And they're warm and alive and kind of cute.

I'd have no problem picking off a vampire or a zombie but I'd have to get to working on my cardio again. I'd likely end up as dinner for either of them so I won't be picking any fights any time soon.

Which horror BOOK left a lasting impression on you?

Book? As in one? I can't possibly pick one. Horror novels shaped my childhood and helped me cope with a lot of truly terrible real life horror that was flung my way. So I'm picking five.

The Witches Buttons by Ruth Chew I remember picking this off of a RIF table (remember those?) when I was in first or second grade and reading it until the pages fell out. I cannot describe the complete devastation that overcame me when I returned home from school one day to discover my mother had thrown it away. There is no doubt in my mind that this is the reason I hoard books now. This book also set off my lifelong love of reading.

Flowers in the Attic by V.C. Andrews was about children who had it worse off than I did! And then there was the incest. So taboo, so over the top, so perfect for any tortured pre-teen.

Pet Sematary by Stephen King was the first horror novel that made me cry and also ruined many a cheesy horror novel for me when I realized that I loved the characterization nearly as much as the monsters,

Drawing Blood by Poppy Z. Brite helped me feel not so quite alone when a main character shared the same traumatic life event that I experienced as a young teen.

I first read Geek Love by Katherine Dunn when I was in my early 20's and I reread it every few years or so. It never fails to amaze me and it is the book that I judge all carnie and dysfunctional family novels by. So far, I haven't found one nearly as good. If you find one, let me know, eh?

That's it. Please share your favorites in the comments. If you decide to write up your own post please leave me the link so I can check it out. And don't forget to check out Sci-fi and Scary who gave me the command inspiration to create this post!  I hope you all enjoy it.
horror villains