I wrote this guest post/review for Scifi and Scary. 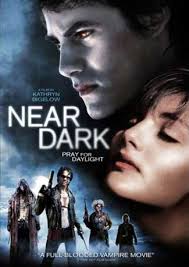 The word "vampire" is never mentioned in Near Dark, but that doesn't stop this 1987 cult favorite from being one of the best modern-era vampire films. It put then-unknown director Kathryn Bigelow on Hollywood's radar and gave choice roles to Aliens costars favored by Bigelow's ex-husband James Cameron: Lance Henriksen is the leader of a makeshift family of renegade bloodsuckers, nocturnally seeking victims in rural Oklahoma; his immortal gal pal is Aliens and Terminator 2 alumnus Jenette Goldstein; and Bill Paxton is the group's deadliest leather-clad ass kicker. Fellow traveler Jenny Wright lures Okie farm boy Adrian Pasdar into the group with a love bite, and he's soon turning toward vampirism with a combination of frightened revulsion and relentless desire. With Joshua Miller (River's Edge) as the youngest vampire, Near Dark is Bigelow's masterpiece of low-budget ingenuity--a truck-stop thriller that begins well, gets better and better (aided by a fine Tangerine Dream score), and goes out in a blaze of glory. --Jeff Shannon
5 out of 5
When Scifi and Scary mentioned she was looking for book bloggers to share a bit about their favorite horror movie, I knew instantly what I was going to write about because only one movie has stuck with me from my childhood. I grew up in a time of some amazing and amazingly terrible horror films. We spent our summers haunting our local video rental store for every horror flick we could find and they were easy to find back then. We grabbed everything from The Exorcist, Halloween, Pumpkinhead, Puppetmaster, Pet Semetary, The Stuff, The Hitcher, to Last House on the Left and Bloodsucking Freaks (anyone remember that one?!). It was a beautiful time to be a horror fan and though we were possibly too young for most of it, we watched it anyway.
But then I found Near Dark and that was it. I had found my film. I was in love. This movie was a unique mix of brutality, familial ties, insane road trip and, of course, a story of sweet romantic love. My young, messed up heart could barely take it all in. Now, many moons later, its allure hasn’t faded for me. This film is something special.
It starts when a farm boy named Caleb, played by a very young Adrian Pasdar, sets out for a night of fun with his buddies. They spy a sweet faced beauty just hanging out, licking an ice cream cone and Caleb is the only one brave enough to walk up to her and ask if he can have a lick of her cone and tells her how she’s just about the prettiest girl he ever did see. He’s not exactly smooth with the words but he’s cute and this awkward seduction surprisingly works. Before you know it, Mae is in his truck and talking about how enraptured she is by the night but he’s more interested in her lips to really take in her words. He gets his steamy kiss and a little more in the form of a love nip that leaves him bloody and a little stunned. She then runs off into the night she so adores.
As Caleb is walking home (his truck has broken down), dawn arrives and he starts to feel extremely sick. His dad and little sister start heading towards him to help him out but a strange RV speeds by and swoops him up. This is how he meets Mae’s “family” which consists of Lance Henriksen and Jenette Goldstein as the leaders/parents/what-have-you, a wild-eyed and wicked Bill Paxton and a boy named Homer who is possibly the most chilling member of the group. Caleb soon learns that he must kill in order to become an official member of their murderous little family.

Damn. All he wanted was a little kiss.

Caleb quickly realizes that they are not kidding about the killing bit when they visit a bar for some refreshments and all hell breaks loose. Intense violence and fright ensues as well as a few classic one-liners. “I hate ‘em when they ain’t been shaved.” Make of that what you will . . . Anyway, the odds are upped when Caleb’s family, who has been trailing the RV, catches up with them.
This movie is violent, sexy, ruthless, sweet, gory, scary and romantic and it gets all of the beats right. Some people complain about the end but I’m a romantic, I suppose, and it made me happy. The pace is steady, it has an emotional heart and the entire film feels grimy which perfectly fits a murderous life on the road.  If you’ve never seen it, you need to get going on that.
What's your favorite scary film?
Horror Film