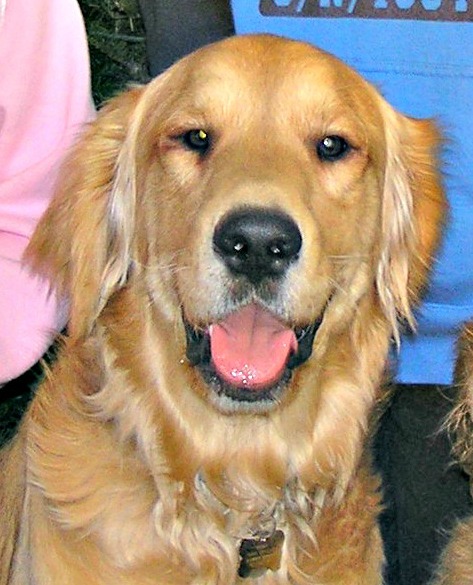 I'm about to bring the room down so please feel free to skip by this one.

My sweet Buddy has a brain tumor. He's been having seizures for the first time in his almost eleven years. The first happened about 8 weeks ago, the second last Monday and the third this Monday. Seizures are a scary thing. They make him blind and wobbly for a good 30 - 45 minutes and this last one kept him off his feet for almost an hour. He's had a long life of leisure and we have been truly fortunate to have had him with us for this long. He was originally my sister's dog but he landed with me when he was only 9 months old when she divorced her husband. He's always been the sweetest, goofiest dog, scared of his own shadow and will give his favorite bed up to any cat who wants it. I've always said he's a poor example of a golden retriever. He can't catch to save his life. He is one of those dogs you can toss a piece of chicken at and he'll manage to move his head the wrong direction so it beans him in the eye/ear/nose. Every time. He also never learned to swim. When he was younger, he'd walk across the shallow end of the pool on his two hind legs and do the doggy paddle with his two front paws and think he was swimming. But he's also the best example of the breed, he's sweet, loyal and is always there to comfort you when you're sad. Goldens his size typically don't make it past nine years, I'm told. I had a smaller retriever who lived until 16 so I was hoping . . . but it isn't meant to be. He probably only has a few months left so for now he's getting all of the treats he wants and I'll take him on the trails for short walks as long as he is able. Give your pets a hug and an extra treat. Their lives are so damn short.