Deepest Desires of a Wicked Duke by Sharon Page 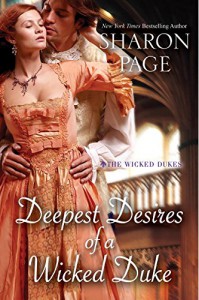 I was innocently perusing Netgalley when I accidentally stumbled upon this book. Somehow I hit request and now it is mine ;)

When I drafted this review I was too lazy to look up the title and saved the file as “The Randy Duke”. Now I know I haven’t read a historical romance in a long time but I don’t remember them being anything like this one. It starts out with the hero revisiting his path to self-destruction and involves a visit to a party where he walks in on his best friend who is doing a very naughty thing to a woman’s backside.

My how things have changed while I was away reading my innocent little horror tales!

If you’ve ever wondered what those stiff upper class historical romance gentlemen get up to when they leave the fancy ballrooms, this book fills in all the blanks in vivid detail!

Hell, if I had only known I may have been reading little else. Ahem. Anyway there is a story here. Let’s see if I can find it . . .

Oh my. Betcha know where this is heading?

I’m not going to lie, this book is not going to be to everyone’s taste but I thought it was a joy to read. I’ve always loved the game of Clue and its over the top silly characters and this book seemed to take a lot of inspiration from it. There are greedy women, callous and arrogant men, a few misguided souls, quite a few murderous intentions and there’s a lot of kinky sex going on even as people continue to DIE. I basically loved it all. But I especially loved the complicated sexual tension between Sin and Portia. There was a lot of pain there for the two to wade through and all of it Sin’s fault because he had no willpower, was very broken and had very little self-esteem when they first fell in love. I don’t know if I totally buy into their HEA but I’m okay with that because there were some genuine feelings of love behind the whole mess and I do feel like Portia was a good match for The Randy Duke and went into it with her eyes wide open and well aware of his faults.