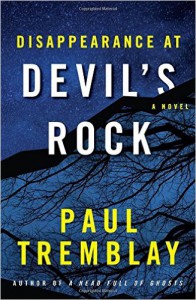 This is a slower paced mystery about a missing 14-year-old boy, his devastated mother and his heartbroken sister. It is a good story but it is not a horror novel. Do not be led astray like me.

A family is shaken to its core after the mysterious disappearance of a teenage boy in this eerie tale, a blend of literary fiction, psychological suspense, and supernatural horror from the author of A Head Full of Ghosts.

I think I missed the supernatural horror bits. First The Turner House disappoints with its false ghost promises and now there’s this one. Damn, I am totally striking out in January.

Anyway, I listened to this book on audio and though it was too long and I drifted here and there, I never felt an urge to shut it off. I’d probably give it a 3 ½ but I’ll bump it up to a 4 because it was quite a bit better than “meh”.

The story revolves around what really happened the day (or was it night? The mind fails me once again) Tommy and his two pals went out to Devil’s Rock to do something . . . Tommy’s two buddies returned home safe and sound but Tommy did not. Now it’s up to Tommy’s mom to piece together exactly what happened. When Tommy’s diaries pages start appearing out of the ether she begins to question everything.

And I don’t blame her. I really felt compassion for Tommy’s mom. She was a well written character and even had some realistic flaws, eventually breaking down and losing her cool. I loved to read that. It made the story come alive for me.

Basically, the story is one long, slow reveal of what happened prior to that fateful day (evening?) at Devil’s Rock. It’s set in the present day but the past is shown via the diary entries and through flashbacks. I’m not going to give it away. If you want to know, you’ll have to read the book.

It’s an enjoyable thriller only marred by too much inane and repetitive dialogue between the boys. They are teenagers and their conversations go a little like this, a little too often for my liking.

Josh: Anyone up for Mindcraft?

Luis: Mindcraft is AWESOME man but dad says I need to get homework done tonight.

Tommy: Your dad is such a Hard-o! (I did not mean hard-on pervy spellcheck)

They have their own lingo, which is normal for most teen boys, but that doesn’t mean it’s fun to read and, believe me, it's even less fun to listen to. Almost immediately that lingo annoyed me and when the boys were together it never let up.

The narrator, Erin Bennett, does a decent job with the work but she's just a little too polished at times and I did feel pulled out of the story on a few occasions, especially when she calls out a name before speaking their dialogue. I’m not sure if it was a narrator choice or if the book was written that way but it was off-putting and strange.

The actual mystery is doled out slowly as it should be, I take no issue with that. I only wish the book had been pruned a bit where the silly conversations and sometimes repetitive scenes were involved.