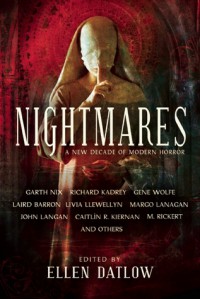 I received the ARC from Netgalley. Thanks, Netgalley!

Holy crap this book took half my life to read. It says it was only 432 pages long but I Do NOT Believe It. There are sooo many stories. Too many stories. No one needs to read this many stories about nightmarish scenarios all in a row. I’ve always felt these Datlow collections were overstuffed and steered clear of them for years but this one got me with its tantalizing cover. The next time I shelve one of these tomes someone please knock some sense into me and point me to this review.

I was going to review each story in exquisite detail and even took notes but there’s no need to take up half of your life with all of that and besides my fingers would likely fall off and I kind of need them. I’ll just stick to better describing the loves and the hates and throw a few words at the meh in the middle. 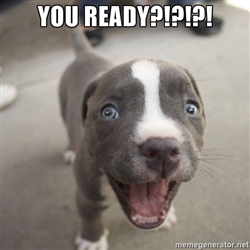 Shallaballah by Mark Samuels, 1.5 Stars: Why the editor decided to start this collection off with what I consider one of the worst stories in the collection is beyond me. Perhaps it’s just me and my atrocious taste but if I had my way this story wouldn’t be here. Guess that’s why I’m not an editor.

An asshole actor destroys his face in a car accident, shady Doctor steps in to repair the damage at a super creepy clinic and bad things happen.I didn't care about any of it because the MC was a dick. It was also vague and confusing near the end and I was left screaming, “Why and WTF did I just read?” Clearly you can skip this one if you want to or read it and tell me what a dummy I am.

Sob In the Silence by Gene Wolfe, 3 Stars: A dastardly man gets what’s coming to him. Brief but disturbing.

Our Turn Too Will One Day Come by Brian Hodge, 3.5 Stars: I love me some dark family secrets and this has a grisly one. Word of advice. When someone calls you at 2am and tells you to bring the shovel, hang up and go back to sleep.

Dead Sea fruit by Kaaron Warren, 4 Stars: A story about a dentist, anorexia and a creepy ass monster called The Ashmouth Man. One smootch from him and you will never want to eat again. Who wouldn’t want a kiss from that?! Just kidding. I enjoyed this. It was strange and unique and the ending was quite perfect.

Closet Dreams by Lisa Tuttle, 5 Stars: Well, this was disturbing and I am not easily disturbed. It bothered me after I finished it. It’s scary, nightmarish, heartbreaking and it’ll haunt you.

Spectral Evidence by Gemma Files, DNF: I just could not go on with this one because of the format and all of the footnotes. I felt like I was reading for a school assignment and would be tested. I wanted nightmares not brain hurt when I picked up this collection.

Hushabye by Simon Bestwick, 3 Stars: This wasn’t what I’d consider horror and it leaves you hanging in the wind at the end. I hate when that happens.

Very Low-Flying Aircraft by Nicholas Royle, 2 Stars: The foreshadowing here was about as gentle as a baseball bat to the skull. It’s a story about a cocky dumbass of a pilot who puts his loins ahead of human life. Meh.

The Goosle by Margo Lanagan, 5 Stars: This is one of my favorites. It’s a fairy tale retelling that balances sarcastic humor with painfully dark undertones.

The Clay Party by Steve Duffy, 4.5 Stars: This is a gripping tale about a group of misguided settlers attempting to take a short cut instead of sticking to the trail. Nothing good comes of it, as you can imagine. This is another that ends perfectly.

Strappado by Laird Barron, 4.5 Stars: Two party-goers are invited to a super secretive art show and very bad things happen. This story was weird and twisty and will possibly give you nightmares.

Lonegan’s Luck by Stephen Graham Jones, 3 Stars: Back in the Wild West a super sleazy snake oil salesmen sets out to do what he does but things go awry. As I read through my notes I have no recollection of the story so 3 stars it is.

Mr. Pigsny by Reggie Oliver, 4 Stars: This story about death, art and a weird little man was creepy as hell.

At Night, When the Demons Come by Ray Cluley, 4.5 Stars: An apocalypse has happened and now demons hunt the remaining humans but it’s the women who have the most to fear. This was most definitely nightmare inducing and one of the better tales in the collection.

Was She Wicked? Was She Good? By Mary Rickert, 4 Stars: What's a parent to do when they discover their little cherub has a cruel streak and enjoys harming small creatures? This is the dilemma posed to the couple in this chilling story. The author paints some terrible images and even though I don’t think I entirely followed all of it, I did enjoy it. It needed to be longer, if you ask me.

The Shallows by John Langan, 2 Stars: I honestly don’t know WTF this one was all about. It was the sad story of a dying woman, a dying world and a lonely dog and a man recounting three different stories. My mind, oh how it hurts. There were whispers of cosmic things but that wasn’t enough to save this for me.

Little Pig by Anna Taborska, 4.5 Stars: Holy dogs and demon cats, was this one ever disturbing. Imagine you’re a woman, all alone with a small son and an infant to worry after and you are on the run. Now imagine there are starving wolves nipping at your heels. Now imagine the worst. This is one I won’t ever forget.

Omphalos by Livia Llewellyn, 1 Star:I despised this story about a family trip to hell. I don’t despise much, my tolerance for the awful is pretty damn high, but this one? This one was HORRIBLE with fifty exclamation marks. Don’t get me wrong, the writing was fine. I’m not talking about the writing. I’m talking about the content. Descriptive incest between a daddy and his daughter happens and I do not care if that is a spoiler. The people need to know. It was over the top and should’ve come with some kind of flashing trigger alert warning. But not only that (as if that wasn’t bad enough) it ended in one of those weirdly confusing, vague ways that left me squinting my eyes and wishing I hadn’t read it at all.

I don't know about you but I need a break right now.

How We Escaped Our Certain Fate by Dan Chaon, 3 Stars: This is zombie tale that features a world where zombies are more of a pest than a threat. It’s laden with loss but aren't they all? There wasn’t much of anything new here but it was decently told.

That Tiny Flutter of the Heart I Used to Call Love Robert Shearman, 3 Stars: A messed up story of skewed childhoods, weirdly twisted love and strange customs that include sacrificing dolls. Love requires sacrifice, after all . . .

Interstate Love Song (Murder Ballad No. 8) by Caitlín R. Kiernan, 4 Stars: We meet two serial killing twins, who just so happen to also be lovers (twin-cest!) just as their road trip of death and destruction comes to a bloody end. I have to admit their romance was a little sexy but they were grown-ups so don’t be judging me.

Shay Corsham Worsted, 3.5 Stars: This was a weird one about a deadly lizard man masquerading as an old man. It left me with a crapload of questions but I kind of liked it.

The Atlas of Hell Nathan Ballingrud, 4 Stars: This was an interesting story about a rare book seller, a mob man and their journey to find The Atlas of Hell! The Atlas of Hell will lead you to objects brought back from Hell itsownself, objects fools are willing to pay big money to own. Who wouldn’t want to own that?!

Ambitious Boys Like You by Richard Kadrey, 4.5 Stars: Two thieves hit up the wrong house. Instead of a weak old man, they find dolls and booby traps and a whole lot of pain. This story was inventive, dark and creepy as hell and a great way to finally end this collection.

Hopefully I got them all but I can’t guarantee it and I am all typed out so this is all there is. There are some nightmarish stories here mixed in with a bunch of meh and I would recommend it with the caveat that you should not attempt to read it straight through. Read something else in-between these stories, split it up, you’ll thank me later. There is too much darkness to be taken in alone here and you may lose your will to read and to keep your eyes open.

Audiobook Challenge: Book #4 (not an audio)