This is a truly excellent collection of short stories all about the struggle of addiction. All have a horror twist and there isn’t a dud in the bunch. If I didn’t have to work, feed and clean up after people all the live-long day, I would’ve finished it in one sitting because it’s that good. I’m not going to rate them. Just know that they’re all around the 4 1/2 – 5 star range which totally averages out to a 5, right?

Things get off to a dark start (and stay there, really) with this story about a man caught in the throes of alcohol addiction. His life is a wreck, he is haunted by his mistakes, by his never-ending thirst and perhaps by something supernatural. It’s unflinching and you really do feel for this mess of a man as he is helpless to stop the all-consuming thirst . . .

The One in the Middle by Jessica McHugh

In a not too distant future, a man has lost the love of his life due to his addiction. This only feeds the vicious cycle as he longs for drugs to take away his emotional pain. He lives in a desperate world where the wealthy pay big bucks for something only the drug addicted can offer them. But he’s not desperate enough to sink to that, or is he? This is apparently an excerpt from a longer work called Green Kangaroos, which I now need because I am the nosey sort, but the story feels complete enough here. This one is dirty and brutal and harrowing.

Garden of Fiends by Mark Mathews

Oh how I loved this one. It’s haunting and terrifying and all around awesome. Tara is a recovering addict and every day is a struggle to remain sober. She has a family who loves her and will do anything to keep her alive and I do mean anything. This is a story about an addict, a garden that grows terrible fruit and the damage it all does to one once close-knit, loving family. It’s sad and horrible and beautifully written.

This is a little snippet of a story that started with a party trick that turns one woman on to a new obsession that’ll put some images in your head you may not easily forget. Eww this was disturbing! So fantastically disturbing and I wanted more!

Ted is a slave to his addiction. When he shows up loaded at his latest AA meeting his sponsor is forced to take drastic measures and hands him a business card, telling him to go to the address on the card and ask for “the last bottle he’ll ever need”. He gets it and gets his life together but the past will come back to haunt in a most terribly heartbreaking way.

Torment of the Fallen by Glen Krisch

Maggie is 15, a runaway, sees demons and sets out on a course of disaster to locate her father. This was like watching an extremely dark episode of Supernatural with a surprise ending and I adored it.

This one starts out in a most startling manner. Jeremy arises after a saucy night to discover that blood is oozing out of a place it shouldn't be oozing out of. He tries to shrug it off as a result of overuse but it’s difficult to shrug off something like that, especially when it doesn’t stop oozing! Uh oh. This story is darkly comical and is laced with my favorite kind of twisted humor. It’s probably my favorite because of that. Sex, drugs, cravings, spiders and madness fueled by drugs and nightmare images? What’s not to like? It’s also gory and bloody and so very messy. I loved it all.

Awww, this was a short and beautifully told ghost story about a depressed alcoholic, a man and a cat ending with a Ketchum edge. It’s a little scary to me that I just so happened to take this particular progress photo when sitting down to read this collection! 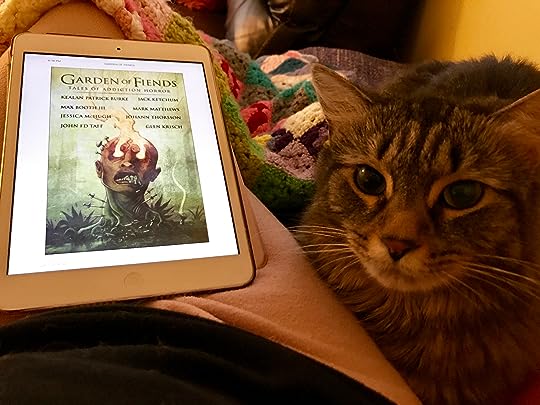 This book was a very cohesive collection and I am so glad I changed my stance on short story collections (due to burn out) and gave this one a try! I received an ARC from the publisher.