Last Night With The Duke by Amelia Grey 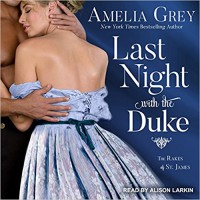 A sexy duke needs to hire a chaperone to escort his two younger sisters and keep them safe from the vipers out to ruin them as they make their debut amongst the ton. He fears someone will harm their reputations to pay him back for a prank he played out years earlier. While visiting the local governess/chaperone business, he witnesses a sassy young woman instruct one of her underlings on the proper way to keep a boy in line and decides then and there that Miss Esmeralda Swift is the only woman able to do the job. It doesn’t matter that she’s probably too young, doesn’t particularly want the job and has a few unconventional demands, such as bringing her little sister and their dog along for the duration. He meets all of her demands and offers her a deal so good she cannot refuse. All of this happens after only one conversation simply because she is the most beautiful woman he has ever set his eyes upon . . .

Esmeralda, her bratty little sister and her rascally dog move into the duke’s home and chaos and kisses ensue. But do you know what doesn’t ensue? The darn revenge plot line that was set up in the first very long scene! That whole “someone is out to get my innocent sisters, whoever must it be?” part of the story never happens. It was just thrown out there to have a reason for these two to meet and that bugged me and a second or two of conflict. Now I’m not a huge fan of mysteries but I’m thinking a little mystery would not have hurt this story because it was a little bit boring. There wasn’t much going on and there was very little actual conflict between the two characters.

Esmeralda was born to the snootier class but she’s been forced to become a manager of the governess/chaperone agency because her mother was disowned when she decided to marry a penniless poet. Esmeralda spends a lot of time longing for the life the she should’ve had by birthright and, I’m not going to lie, that got a little tiresome, boo-hooey, poor me after a bit but she also does right by her little sister and that balanced things out for me. Because she is an employee the duke doesn’t want to mess with her, so instead he flirts and teases and leads her on which I found a little mean. They long for each other but don’t take much action until he learns of her fancy family ties. Meh. As I said, there’s not much of a conflict here. There is a lot of time spent talking about wardrobes, chasing after dogs, going to balls and such but there isn’t any deep relationship development happening. Mostly they like each other’s faces and other body parts and it feels like surface attraction and little else and that isn’t why I read these kinds of books. I want angst, drama, true love. But mostly I want to feel something besides vague boredom. That didn’t happen here.

Narration Notes: Alison Larkin narrates this lackluster story beautifully. She has a very engaging voice and was the only reason I was able to keep going. If you plan to read this series and you enjoy audios, this one is the way to go!

2 ½ stars for the story but I am bumping up this unabridged audio version to a 3 because the narration is lovely and made me tune in to the very end.