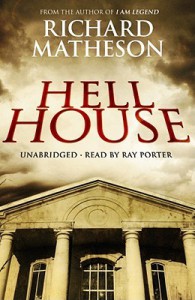 A rich guy offers to pay a group of people to stay a few nights in a haunted house to prove there is life after death. All previous attempts to do such a stupid thing at this particular house have ended very badly for the suckers brave or stupid or hard-up enough to have a sleep-over. It’s no different this time around.

I read this book closely on the heels of finishing up Shirley Jackson’s The Haunting of Hill House which was probably a big mistake on my part as the premise of these two books is nearly identical and Jackson’s story didn’t thrill me the way it did most people. Same goes for Hell House though I did like it a wee bit more than Jackson’s story but probably only because it was more lurid and crazy-pants and I like that kind of thing but it does suffer from the same over the top characterization.

I listened to this story on audio and the narrator, Ray Porter, does an excellent job. He is deadly serious which suits the story and he manages to deliver the lady voices in a way that doesn’t make them sound completely ridiculous even when they’re forced to behave in overly hysterical ways. He does a good job with the men and the evil inhabiting the house as well.

I’m going to give this the same rating as the Jackson book. 3 Stars.