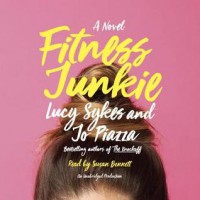 This is a book about wealthy people wasting their money on fad health crazes and one 40ish successful woman’s descent into it all after her business partner who is her childhood friend tells her she is an embarrassment and can no longer be the face of the company she helped build because she’s too fat. And no, very much to my disappointment, she does not stab him to death.

She owns 49% the company and though she’s hurt by his rejection and horrible insults, she silently slinks away and embarks on all of the fad fitness journeys that money can buy. And, apparently, money can buy you a lot of useless diet aides (clay eating?!) and retreats and painful over-priced workouts. Thankfully, I’ll never have enough extra money laying around to throw away on a $50 topless yoga class!

Janie wasn’t too bad as the main character. She’s dealing with a double whammy of betrayal and humiliation and manages to keep on plugging away instead of falling into a fit of “poor me” despair. Despite being a little insecure and very dumb about her business partner, Beau, she’s pretty likable as far as these types go. She knows these things are ridiculous but she goes along with them anyway; drinking strange juices, spending $15,000 on a retreat, eating a little clay, taking her top off and buying a fitness watch thingy that embarrasses her at every turn.

This book does poke fun at Gwyneth Paltrow and her silly Goop-iness but other than that I found it all pretty shallow and only vaguely entertaining and though it promised to be “outrageously funny” it really was not. However, you may have a better sense of humor than I.