The Doll House by Phoebe Morgan "The house surrounds us. I feel like it’s watching me."

This book isn’t really about a dollhouse. Nor is it about creepy dolls. It’s about family secrets and I love those almost as much as creepy dolls so I was good with that. Unfortunately, I guessed the biggest secret way too early and you probably will too.

Sisters Corrine and Ashley are being watched/stalked/terrorized by a third person without their knowledge. Corrine starts to catch on when someone begins leaving pieces of her old childhood dollhouse where she can find them. Everyone else thinks she’s starting to go a little mad. She’s always been a little jumpy, anxiety ridden and seen faces in windows that have spooked her. Recently, she’s been desperately trying to have a child through IVF and this is the conclusion her friends and family jump to – bunch of jerks. Ashley, the sister, has her hands full with a secretive husband who is spending far too much time at work, a baby who won’t stop screaming and who won’t sleep, a teen headed for trouble and mouth-breather phone calls. I felt for poor Ashley. Had I been in her position I might’ve got behind the wheel and just kept on driving . . .

The heart of this story rests on its day to day family dramas so if you’re not into all of that you may find things a little slow going. I have to admit that I found it a struggle at times and too slow moving and I typically love this sort of thing. This is not a fast paced thriller, by any means. The stressful atmosphere is almost claustrophobic and there’s an underlying sense of dread but discovering that I was right about the “why” behind the big secret with still many pages left, took a lot of the thrill away for me. I was oh-so-wrong about the who though and I enjoyed that tasty little surprise.

This is a nice debut but it wasn’t quite compelling enough to grab and hold my attention, nor did I ever get fully emotionally invested in the characters. I’m giving it a three for those reasons. 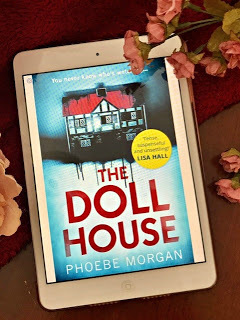