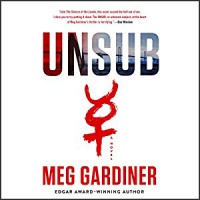 This is one of those books with a trillion reviews so I am going to use this to my advantage and let my laziness take over and be super brief.

Unsub was pretty good but I didn’t fall in love with it like many a reader before me has. To get truly wowed over I suggest you read The Fourth Monkey by J.D. Barker after this one (not before, definitely not before). The Fourth Monkey features the POV of the serial killer and it is truly chilling. It’s also very dark and demented.  I loved that book but this “review” is about Unsub so enough about that.

I liked Unsub well enough, thus the 3 ½ stars but, I don’t know, it seemed a little too clean for my taste. Almost like one of those semi-gritty serial killer shows on network tv. Maybe I read too much horror and perhaps that’s the reason but the kills didn’t hit hard enough and so much of it felt a little too familiar to me. I wanted something from the killer’s perspective but I never got it.

I wasn’t particularly emotionally invested in the characters either which is a bit of a shame. I liked them well enough but something was missing to make me FEEL and I just can’t explain it. I liked Caitlin, her boyfriend and her broken father but I didn’t feel any emotional pull towards them. With that said, there were several imaginative and creepy scenes that were set by the killer (bee! crows!) but it wasn’t enough for me. I wanted more of that.  It also ends with a cliffhanger that wasn’t very shocking to me but it didn’t piss me off so there is that because I typically despise cliffhangers. If you enjoy audio I would most definitely go with that option because the audio narrated by Hillary Huber works well with the action packed plot. Had I read this in paper I might’ve put it down and left it there for several months.