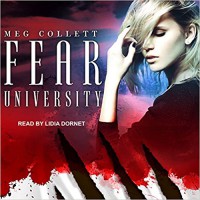 I’m not fond of the title of this one. It gives the book a generic feeling of YA or NA and does the book a disservice because it’s a gritty, violent and action-packed story that deserves a title such as Aswang: Demon Dogs! That’s catchier, don’t you think? Or maybe Devil Dogs Want to Eat Your Tasty Bits. Yeah, I like that one but maybe that’s why they don’t ask me. Anyway, I grabbed this because the blurb caught my attention and I’m glad I did because it was pretty darn good.

Ollie has never been able to feel physical pain. Because of this, she ended up abandoned by her mother and was tormented by those who should’ve protected her. She’s grown up tough and resilient and has been living on her own since becoming a young adult. One day she is attacked by a dog-like creature and wins the fight as two young men watch. They can’t believe their eyes. Average humans, AKA civvies, aren’t supposed to win fights against the “aswang”, they’re supposed to become their dinner. They kidnap her and bring her back to “Fear University” where only select families are training to fight a secret war against the aswang beasties. She’s soon entrenched in training for the war by a handsome but all business guy named Luke who is reputed to abstain from sexy times because he likes it too rough. She feels no pain. She is intrigued!

So all that’s going on and a whole lot of other stuff that I will not spoil. This book is definitely more urban fantasy than NA angst or romance and I liked that about it. There’s action, the pace is fast, there are many revelations and surprises, the characters are imperfect and their interactions are interesting. But it’s Ollie who makes the book sing for me. She’s carrying the weight of a painful past and she’s sarcastic, cynical and doesn’t take any crap from anyone but she’s also funny and reminded me a bit of Liv from IZombie.

This was a very good urban fantasy but I recommend picking up the next book (and maybe the one after that) in the series if you’re like me and prefer to have all of your questions answered. This book leaves things a-dangling and may leave you pulling out your hair if you don’t have book two all lined up and ready to go. My library does NOT so arrrrgggh!

The narrator is most excellent. She sounds youthful and tough and exudes emotion exactly where needed.

I received a copy of this audio from Tantor Media. Thanks, Tantor!