Naked in Death by J.D. Robb 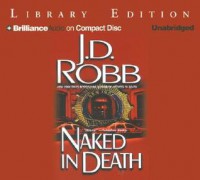 I read this when was it first released in 1995 and decided to give it a reread on audio hoping it would hold up so many, many years later. 23 years later, actually! How did that happen? This book is older than my kids. Older, probably, than a few of my friends here too! Obviously, I remembered nothing about it except that I loved it, that it was set in the future, had a damaged heroine named Eve and that her lover was named Roarke and his past was shady. I was all into characters with dubious pasts back then, still am, I guess. I read a few more in the series before getting side-tracked by life and forgetting about it which is pretty much the story of my reading life with any series be they short or eternal like this one.

I feared Naked In Death might not be nearly as great as I had remembered but miraculously that wasn’t the case. It’s gritty from the get-go and very murder mystery/crime procedural-ish in the most interesting of ways. I think any reader picking this up so late in the game can still enjoy it. It doesn’t feel dated and is so much better than some of the more recent Nora Roberts book I’ve read more recently. I was thinking maybe my tastes had changed but now I’m thinking Nora Robert’s has just written a few duds. Vision in White & Shadow Spell? I’m talking about YOU.

There’s no sense in rehashing the plot of this old book. I’ll just leave you with the good and the not-so-good. The chemistry and dialogue are great, there are the beginnings of some amazing character development which will continue into at least the next few books and I enjoyed reliving Eve and Rourke’s early days.

The downside? There is insta-lust and it takes over Eve’s common sense. I won’t say anything else because its spoiler territory but if you read it you’ll see what I mean. There are also some brutal as hell death scenes, all of a sexual nature, and flashbacks of child abuse by a sexual predator. Lots of death and lots of awful sexual stuff. Be careful if these scenarios haunt you because Robb doesn’t pull any punches here.

I’d give this book a four and ½. It’s not quite the five I remembered but I’m old and crabby now.