I Am Not A Serial Killer by Dan Wells 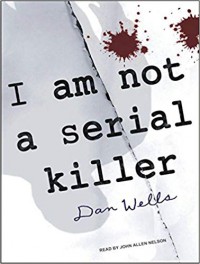 This is a weird book but I think I liked it well enough. Let’s see if I can work out a rating by the time I stop writing out my feelings here.

“I think that fate wants me to become a serial killer.”

John Wayne Cleaver is a teen doing his best not to murder the cretins that surround him. I’m not joking about this either. He has serious serial killer in the making vibes. Even his therapist thinks so. His family runs a mortuary and he’s been exposed to death since he was a child but he’s the only one in his family who finds death fascinating. He’s written school essays on serial killers and is obsessed with learning everything about them. But unlike most killers (besides Dexter), he knows murder is wrong and he creates rules for himself that will prevent him from acting out on his urges to slice people up like stir-fry. But people do not make it easy for him. As you all probably know, most people are jerks. Especially when they’re still in high school. John has one friend and that friend was so annoying I might’ve wanted to slice him up a time or two myself.

This kid is detached, he knows it, you know it and it’s hard to feel for him since he doesn’t feel normal emotions. He mimics others in order to be a decent citizen and get by in society. You think you see where this all heading with comments like these, don’t you?

“If you met me on the street you’d never know how much I wanted to kill you.”

But you would be wrong. The book takes a weird and unexpected turn somewhere midway in and it really threw me off. I thought I was reading one thing and then it turned into another thing and I wasn’t sure I liked where it was heading but in the end I guess it worked out because I didn’t quit it. Just go in expecting the unexpected and you might be ok.

With that said, I must steer you away from the audiobook read by John Allen Nelson. Sadly this narrator was not a good fit for my ears. He has a news anchor voice and he’s not afraid to use it and it continually threw me out of the story. He would be much better suited to a true crime or a nonfiction book. He doesn’t do well with a teen’s voice and this book is told by a teen. He also has the funniest, most cartoony old person voice I think I have ever heard outside of the shows my kids used to watch on Nickelodeon. I laughed when I should’ve been a wee bit sad or terrified.

In the end, I guess I’m giving this production and story a three. I wasn’t happy with the way everything was wrapped up so tidily in the end. It seemed too easy and too unbelievable and it infuriated me a little. Many people say this story gets better as the series moves along. I may try another if I stumble on a free copy but I won’t actively seek them out.