Halloween Bingo 2018: The Mouth of the Dark by Tim Waggoner Where does one start with a crazy book like this one? I honestly don’t know where to begin so I’ll just start typing and see what happens.

I read this book with a group of blogging buddies and the main theme of our chat seemed to be WTF. Some of us were horrified, some maybe scandalized but I think there were a few who were a little tantalized though they’ll probably never admit it, haha.

At any rate, this is a story about a man named Jayce who realizes his grown daughter has gone missing. He makes it his mission to find her or at least to find out what happened to her. He’s sure something nefarious is up and boy is he ever right. He finds a strange otherworld filled with bizarre sex toys and malformed people and a scary being called The Harvest Man. He isn’t at all prepared for all of the weirdness that assaults him but he takes the hits as they come in a stumbling, hapless sort of way and doesn’t run screaming the other way as most other sane people would do. He heads straight into the madness and grossness and batshit craziness.

I enjoyed this book for its unpredictable over the top strangeness. It didn’t scare me but it’s not really that kind of book. I loved that it wasn’t afraid to peek into the dark, twisted corners and slam your face into them. That’s a fun time for me. This isn’t a book where you’re going to fall in love or even feel much compassion for the characters. They’re not assholes but there isn’t a lot to like about them either. It’s the storyline that carries you along as the characters are put into one bizarre situation after another. There are a lot of sexual hijinks in this one featuring otherworldly sex toys. I thought that was a nice bonus but be warned if you’re not into reading about weird sex because there’s quite a bit of it here. Also, the main dude has some major mommy issues (which were expertly explained near the end) and some weird thoughts about his daughter and her sexuality that made me feel pretty uncomfortable in a bad way while reading. Don’t get me wrong, I’m not saying he’s a pedophile but he sure does have some pervy thoughts that I think most dads would scrub from their brains as soon as they hit. This guy sits and stews in them for too long.

The Mouth of the Dark was an imaginative, enjoyable, super pervy story whose pages flew. If you dig weird imagery, some unforgettable sex toys, perfectly placed gore, lots of gross little surprises, gruesome descriptions, dark humor and a finale that wraps everything together you’ll want to read this crazy book. If you don’t like those things, well, you probably wouldn’t be reading my review anyway. 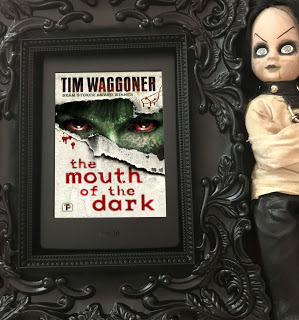 “I’m sorry you got a surprise tentacle job from the Pink Devil.”

And that’s all I’m saying about that!

I'm going to throw this in the SUPERNATURAL square. One down, a million to go!