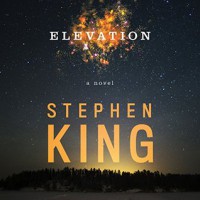 This was a perfectly meh weird story. It didn't offend me but do you know what does? The fact that Goodreads READERS awarded it the best HORROR novel award only because it had Stephen King's name on it. Do these people even read the genre they are voting on? Do they even read the books?

Anyway, this is the story of a perfectly bland middle aged white man who got off on the wrong foot with his new neighbors. He's also suffering from a very odd affliction. When he steps on the scale he loses weight at the rate of a pound or so a day, even when he's holding bags of coins but he's not losing body mass. He's just getting lighter and lighter and soon he knows he will simply drift away.

I don't know about you, but this plot doesn't excite me in any way. It's hard to work up worry about a man who can eat whatever he wants and lose no weight. Worst case scenario? He'll either die or leave this terrible planet and float out into the universe to see things never seen by human eyes. The latter option doesn't sound too bad to me right about now! The side plot about his relationship with the married lesbian couple is only mildly interesting. It felt forced and didn't hit me emotionally at all. Likely because I've read/seen these people a million times before starting this story and there was nothing unique about any of them. I wish their pooping dogs had a bigger place in the story. But at least it's short and I'm out nothing but time because I borrowed the audiobook from my library. It's read by Stephen King so you're either going to enjoy his nasally narration or not. Personally I don't mind it but the story gets a 2 because it just wasn't that great, if you ask me.

The audiobook includes another short story called Laurie. It's about a grieving old coot who has a puppy foisted upon him by his worried sister. After much grumping and complaining he grows to love Laurie and Laurie, like all good dogs, loves him right back. This story I loved. I loved the grumpy old man and Laurie's relationship and there's a moment of suspense that had my heart in my throat. I'd give this one a four. It could've been a five if it were longer.

Combine these two together and this version is getting a three from me.