An Unwanted Guest by Shari Lapena 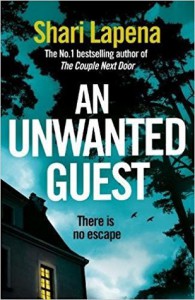 This story takes place at an old fashioned hotel/inn (it is called both things so don’t ask me what’s what because I will be no help at all). The guests begin checking in. There are several couples, a few singletons and the owner and his son are the only two employees due to a snowstorm. The storm takes an icy turn, they lose power and they’re all stranded together until the roads settle down. And, of course, there’s no wifi or cell service because this is a place people come to get away from it all. You just know something terrible is going to happen, or at least you hope it does, right? No worries because it isn’t too long before it DOES!

Someone takes a topple down the stairs and it may or may not be murder! As they reel from the death and are told to leave the body where it lay until the police can arrive (in several days, probably, yuck!) more of these people start dropping dead and a delicious story reminiscent of a game of Clue begins to unfold.

Was it the secretive writer, the lawyer with a whiff of murder lingering about him, the shrew of a wife, or was it her philandering husband, perhaps? Maybe it was the journalist who is just slightly not ok or was it handsome heir to a fortune blowing off some steam? Really, it could’ve been any of these many near caricatures inhabiting the story because when the motive is made clear, I was left scratching my head just a wee bit trying to make sense out of it because it seemed to have all come out of nowhere or maybe I just wasn’t paying close enough attention to the clues for that particular character because I was too focused on all the red herrings. The final twist however was super fun and I loved it.

I didn’t like any of these characters. They were all pretty much either a jerk or a non-character who I didn’t learn enough about to throw them a care. I wish it had been more involving character-wise but it wasn’t a deal breaker because the book was fun and claustrophobic despite me not caring who lived or who died. I think the author was also very self-aware that she had created a cliché or two because one character even calls out their spouse as such which made me laugh.

I’m going to give it a 3. A three means I liked it all of you potential haters out there in Goodreadsland who think a three damns a book to the fiery pits of hell!  Do not come bitching on my review here to explain to me that I read it all wrong because you will not be welcomed into my space. Do us all a favor and save your breath for your own review because no amount of explaining will ever change my opinion on a book.