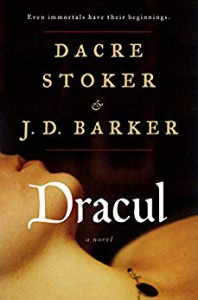 This is the prequel to Dracula and it was inspired by notes and other tidbits Stoker left behind. I wasn’t sure what to expect and went in blind to what the actual storyline was about which, if you ask me, is often the best way to go into a book. That way it’s all a surprise. It could be a pleasant surprise or a dreadful one depending on the book. This one was a bit of both, haha (but dreadful in the best of ways). The Horror Aficionados group read this together. Click here to read everyone’s thoughts.

I’ll tell you a little but not too much about the plot because I think you should all go in blind too and allow the tale to unfold. Dracul tells the story of a young Bram Stoker and his siblings. Set in the 1800’s when Bram is an ill little boy being cared for “Nana” Ellen because his mom is overwhelmed. Nana Ellen was hired without anyone checking into her background. And you know that means something weird is bound to happen, right? Cue the creepy music because the creepy is coming and once it starts it doesn’t let up!

After a strange event occurs, Bram and Matilda start to snooping. And I’m just going to interrupt my review here to say that I adored Bram’s sister Matilda. It would’ve been amazing if the story had been told mostly from her POV because she is feisty and smart and nosey as hell and she asks all the best questions. But it’s told from several POV’s and that’s ok too because it’s a good story. Anyhow, the snooping of course leads to more snooping and the discovery of many odd things. None of which I am going to disclose.

With that said, if you’ve read Dracula or seen any vampire film, you’ll likely have an inkling and some insight into what’s going on here but it’s the telling that is all the fun. It’s descriptive and gruesome and the atmosphere is done just right. It digs right down into the dirt and worms and throws you in there, setting up some truly squirmy scenes that will crawl into your brain and settle in – maybe permanently. I love it when a book is able to do that to me.

I listened to Dracul as an unabridged audiobook with a host of different narrators and instead of distracting me as this sort of thing sometimes does, the six (I think there were six but am too lazy to look it up) narrators helped me quickly place who was speaking and let me know which timeline we were currently in. The tale does skip around in time and I am the type who is easily confused but not so in this case. I fell into this story from the very beginning and only wish I could’ve listened to it all in one sitting but it’s over 16 hours long! Even I can’t hide from life that long no matter how hard I might try because they always find me.

And my favorite quote comes from Matilda (of course!):

Read it. I don’t think you will be disappointed.

I purchased this audio from Audible.com. All thoughts are my own.