The Stranger by Steve Stred 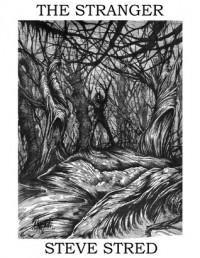 Malcolm and his family are taking their annual camping trip a bit late this season and instead of being met by the usual management, a tall, skinny man is there instead and he utters ominous warnings about avoiding road closures and animals and “other” things hungry for food. As if that weren’t enough, their neighbor is a stranger who refuses proper introductions and rubs Malcolm the wrong way because he’s rude and because he is Native American. Then there’s the giant black wolf that parks himself on the deck and sneers at Malcolm . . .

Umm Malcolm, I have a newsflash for you. These are SIGNS and signs should not be ignored! Turn around and drag your innocent family back home.

Malcolm is arrogant and stupid and he does NOT listen to me or anyone else and by the middle of the story (or probably sooner) I had absolutely zero sympathy for him. He is a thoroughly nasty man filled with hate and awful thoughts. His family members are all nice people and he absolutely did not deserve them and I do not understand how they put up with him. I’d rather live with a werewolf than a man like that. At least I could throw some meat at the wolf to shut him up when he annoyed me.

When the gruesome and terrible things began to occur I went from actively disliking Malcolm to thoroughly despising Malcolm for his careless stupidity towards his family. Ugh, this guy. Anyhow, he is one guy you can enjoy watching suffer without getting a case of the guilts so if you’re in the mood for that you will love this story! Take it camping with you. I dare you, haha! I only say that because I will never go camping of my own free will ever again.

There are many disturbing things about this book besides Malcolm and it’s a good choice for a quick summer read if you’re into an eerie, secluded in the woods tale where terror lurks around every corner. 4 Stars