If you’re feeling like you need some fun, gory 80’s insanity then do I ever have a book for you!

This is the review quote that won me over:

"As if Joe Lansdale wrote, and John Carpenter directed, the Jonestown massacre. SCAPEGOAT is Howe and Newman's Kool-Aid and you'll want to drink it to the very last drop." (Eryk Pruitt, What We Reckon) 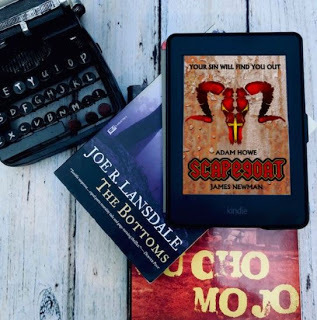 This book is pure madness from beginning to end. Set in the late 80’s, that fabulous time before cell phones and back when hair-metal reigned supreme, a group of old childhood friends reconnect to head out to Wrestlemania III. Mike is now a family man and because of the wife, the baby and work he hasn’t seen his old buddies Lonnie and Pork Chop in far too long. After spending a few minutes in a smelly RV with them, Mike remembers why! Pork Chop is half in the bag, wearing a Rowdy Roddy Piper kilt with nothing under it (ahhh!) and Lonnie’s drinking, driving and doobie smoking have Mike wondering if he’ll make it home alive but he’s trapped in the passenger seat and quickly embraces the mayhem. Along for the ride is a scantily clad beauty and a trunk load of counterfeit wrestling merch.

Sound like fun? It is! And it is so much more.

Lonnie gets stuck in traffic and freaks out that they’re going to miss Wrestlemania and decides to get off at the next exit - remember these are the days before GPS. Little does he know that he’s just driven straight into a scene from hell and it’s only going to get worse from here . . .

There are religious cults, carved up ladies, buckets of gore and an ending that isn’t afraid to go there! I loved it. This book is an experience. If you enjoy the madcap adventures of Joe Lansdale’s Hap & Leonard series I’m pretty sure you’re going to love Scapegoat too.

The writing is terrific and the dialogue is spot-on and sometimes hilarious. I’m pretty sure I knew some of these people in the 80’s. Hell, I might even know a few of them now. The story moves fast and somehow the writers manage to fully flesh out the characters and create a plot that continually surprised and sickened me in the best way. It made me laugh and it made me cringe and that’s not something that usually happens when I read because I am grumpy, tired and jaded at the end of the day.

It is the darkest kind of fun and if is this is your thing and you haven’t read Scapegoat yet I think you need to fix that!