Sleep In The Dust of the Earth by Anthony Hains 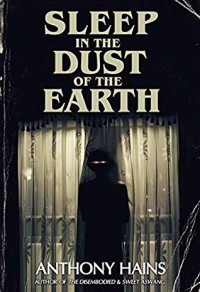 Sleep In The Dust of the Earth is a disturbingly fun little novella that caught me off guard in the best of ways.

It tells the story of Ace whose mother-in-law, Gretchen, has recently passed away. His family and his in-laws and their two creepy kids have gathered at Gretchen’s enormous and possibly haunted Victorian mansion to settle up affairs and say a final goodbye. And then things get mighty strange indeed!

Gretchen, who was reputed to have a fascination with the occult in her final years, was apparently passing on her learning to her two weird grandkids. When grannie’s cremains go missing and Ace and his wife Runa catch the kids doing some - uh, odd things, they start poking around and that’s when the disturbing fun I promised you begins! And that’s all I am going to say about the plot because this book is only 99 pages long and you need to read it for yourself.

For such a slight story I thought it was very well constructed and did its characters justice. The atmosphere was also excellently put down on the page. The enormous mansion was described as a place I’d love to live. A place, “where you could go days without seeing another family member if that’s what you wanted.“ Because, honestly, sometimes we want that, right? Or is it just me? Haha. Anyhow, the descriptions are perfect and not overly done. There’s just enough written here to set the tone. As a bonus, I found parts of the story darkly comedic and horrifying all at the same time. That’s a hard thing to pull off but it worked for me.

If you like a well written, grisly creepy kid story that doesn’t take itself super seriously this one is for you! It doesn’t sugar-coat the creepy kid things either so be warned. It also doesn’t pretty things up. There’s one scene that hurt my heart but I will not spoil.

It takes some crazy and unexpected turns and put a few images in my head that I desperately wish I could forget. It is a truly freaking unsettling little read and I LOVED it.