The Twisted ones by T. Kingfisher 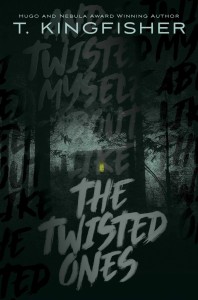 I knew I was going to read this book someday so I avoided all of my friends reviews and went into it blind. I was expecting it to be good but I wasn’t expecting it to be such a perfect book for me! One of the main characters is a redbone coonhound which is same breed as my pup, the plot is genuinely unnerving and some scenes are chill-you-to-the-bone and seep-into-your-soul scary but the best surprise was the humor. I was not expecting humor and I appreciated the humor so much. So many books I read are deadly serious, not that there’s anything wrong with that, but some of them could benefit from a little snark and/or comic relief to help you relate better to a character or break up the tension and/or relentless impending doom! This one does it right. The humor is organic and part of the character development and it never felt forced.

I’d like you to go in blind with this one as well so you can cherish all of its unsettling turns so I’m not going to hit you with a plot dump. I’m also feeling meh and a little lazy, so there’s that too. This book is folk horror which is a little hot after the release of Midsommar and The VVitch. I’ll be honest here and tell you that I had no clue what folk horror actually was until very recently. I always thought it was retelling stories rooted in those dark old fairy tales where the wolf eats grandma and feeds some of her parts to LIttle Red but it goes much deeper than that and now I want to read it all.

I was smitten with Bongo the not-so-bright dog mentioned above but also with the conversational writing style.Your mileage may vary on this but I felt as if a friend were telling me her story and it was perfect. The only snag I hit was the old journal bits in the book. They were super boring, if you’re asking me, and I had to do a little skim-read of them because my brain just didn’t want to take it in.

This is an interesting story filled with a unique plot, fun characters, tension, humor and genuine creeps and if you stumble with the journal segments as I did just give them a skim and keep on going. I don’t think you’ll be sorry.