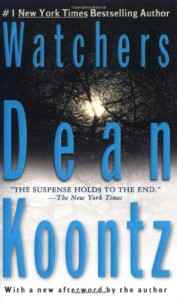 I recently reread this old favorite of mine as an unabridged audiobook. It was one of my childhood favorites so I was almost afraid to touch it and ruin the mystique I'd built up around it. Surprisingly enough, I managed to enjoy most of it despite the fact that I've become much pickier and crabbier about my reading choices as I've, eh, matured.

This is Koontz's famous tale about genetically engineered animals which is probably much more probable and frightening now than it was in 1987! Political bigwigs have managed to fund and create "The Outsider", an intelligent killer who lives for the thrill of the kill. They've also created a golden retriever with the intelligence of a bright human (I state this because many dogs I know are smarter than many humans I've come across). The government intends to use the dogs as spies to learn about the ever elusive "enemy". After all, who would ever suspect a goofy retriever of spy tactics? These two genetically altered creatures are so smart they outsmart the scientists and escape the lab. The "Outsider" goes on a killing spree while the retriever finds a loving home with a kind man who names him "Einstein". For some inexplicable reason, "The Outsider" hates Einstein. Hates him with an undying passion and wants him dead (jealous of his doggy beauty, perhaps?). Because the two are psychically linked, it spends its time tracking down the dog when not decapitating innocent people and animals, that is.

The remainder of the book is filled with the antics of a crazed killer-for-hire, corrupt political goings-on, "The Outsider's" quest for death and destruction and the gooey-sweet love story between Travis, a victimized woman who is so naive as to be completely unbelievable and whose name I've already forgotten and Einstein the dog. This is the kind of love triangle I enjoy, haha.

I still loved Einstein this time around but spent a large majority of the book annoyed at the woman character who was all helpless, pathetic and needed rescuing. She was 30, THIRTY folks, and so sheltered and beaten down by a crazy old aunt that she had absolutely zero life experience and was completely missing a backbone. I don't remember noticing those things when I was a teenager or maybe I just accepted them as normal because I didn't know any better at the time. If that's the case, maybe getting older isn't such a bad thing ;)

I enjoyed the re-read and recommend this book to any dog lover and Koontz fan. It's still one of his best but not quite the five star read I remember.
Tweet