The Madness of Lord Ian Mackenzie by Jennifer Ashley 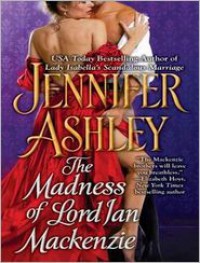 When the book begins, widow Beth Ackerly is engaged to a man she doesn’t love. She had love once but now she’s settling for comfort and children. Those dreams are tossed out the window when Lord Ian Mackenzie, rumored mad son of a duke, first sees her and sets her straight about her money grubbing fiancé. Ian decides he wants her for himself and this off kilter and charmingly strange conversation happens:

“You could always marry me,” Lord Ian said abruptly.

Beth blinked. “I beg your pardon?”

“I said, you could marry me. I don’t give a damn about your fortune.”

“My lord, why on earth should you ask me to marry you?”

“Because you have beautiful eyes.”

“How do you know? You’ve not once looked at them.”

I just loved this scene and most that followed. Beth decides he probably is insane but decides that having an affair with him might not be a bad idea. Beth appreciates his blunt honesty and his looks set all of her sense alive. It turns out that Ian has what appears to be a high functioning form of autism. Because of the times and an unkind father, he spent over half of his life in an asylum and believes he is incapable of love.

I’m not going to rehash the plot. I’ve been doing that too much this month and you really should experience it all for yourself. The love story is beautiful, sensual and filled with touching and charming dialogue. Beth is a resourceful and understanding person who is the perfect match for Ian. He tends to wander off into his own his head and blurt out things having nothing to do with the current conversation. There is a murder mystery subplot that was sort of meh but I wasn't reading this for the mystery anyway. There’s also a PIA bad guy who has a vendetta against the Mackenzies and causes no end of trouble for Ian and Beth but in the end it all makes sense and I was happy with the resolution.

This is a romance worth reading if you’re a fan of sensual historical romances and are looking for something a little different.

Narration Notes: In all honesty, I can’t say this narration is the best I've ever heard. Angela Dawe does a decent job with the accents when she’s doing them. She has a tendency to slip in and out of the English and Scottish dialect and that was a little bothersome. I also found her reading of the narrative a little cold, stiff and slightly monotonous. It wasn't bad enough to put me to sleep but if the story hadn't been so engaging it would have been tough to stick it out. The production was also filled with several way too long pauses. Did the narrator stop for a snack or did I sit on the pause button? It was weird. If I had a vote on The Audies Awards it wouldn't go to this one.