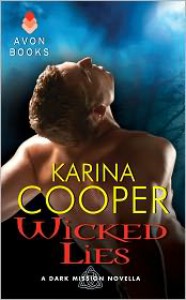 Wicked Lies is book 4.5 in the Dark Mission Series. Don't be like me and read this one first. Grab the others and read them in order. Some reviewers say this story stands on its own and it kind of does because it's an intimate little snapshot into the romance between Jonas and Danny but there are many interesting aspects mentioned that left me wanting to know more. And I would've known more had I read the previous books. My fault entirely, I know, but I got excited when I heard a big publisher like Avon was releasing a male/male novella and I had to read it asap!

First off the story is intriguing and sensual but I am so PO'd at myself for reading this out of order. Jonas Stone is a troubleshooter for a group of rebels. In this world, the "Church" and its twisted morals have created a group called the "Mission" who hunt down and torture anyone suspected of witchcraft. I'm a little confused about the back story but that's the gist. When the novella begins Jonas is attempting to lead a hostage to safety using only his voice. Danny is the grandson of Jonas's leader and Jonas cannot fail. Jonas is gay but because of the "Church's" views he's had to keep his secret to himself and close himself off to emotional entanglements. But then Danny starts flirting over the com and Jonas flirts back telling himself he'll do just about anything to lead the guy to safety. . .

“Maybe it was the pain. Maybe it was the surreal kind of intimacy in the small cell; just him and a mysterious voice from God. He couldn't see Jonas’s face. Didn't even know what to picture, with that smooth-as-milk-chocolate tenor and decisive optimism. He kept one dirty hand cupped over his ear, only vaguely aware he did it.

“With a voice like that,” Danny murmured, his chin sinking to his chest, “I’ll follow you into hell itself.”

This was my favorite part of the story. It’s tense, intimate, character focused and, despite everything going on, there’s some fun, sexy dialogue happening through those comms and this bit makes me want to track down the entire series and read them in order. Danny falls a little bit in love with the angelic voice before he ever sets eyes on Jonas. Once they're whisked away to a safe-house together, Danny realizes Jonas is "The One" even though he's unsure if Jonas is even into him. Jonas only deals in one night stands and doesn't want to get involved with Danny but the guy is persistent, into him and pretty damn sexy. Seriously, why resist?  The trouble comes after they, um, get involved and Jonas's allows his fear to consume him.

Jonas didn’t play with the nice ones, and damn it, Danny was a nice one. He deserved hand-holding and shared smiles and hi, how was your day?, not the hard, quick fuck of a man who didn’t deal with morning-afters. Jonas didn’t play well with others.

This is the part I had a little trouble with because the story is short and there isn't enough room to explore Jonas's past. He is scarred both emotionally and physically and I'm guessing this happened in a previous book. He pushes Danny away because he makes him want something he never expected to have. I wanted explanations, mushy confessions, flashbacks to past hurts, just something more. I didn't feel the deep emotional pull that I so hoped for because I wasn't getting the whole picture here and things moved too fast. I guess I'm spoiled after reading Amy Lane who drags you down into the darkest depths and leaves you there to suffer in agony for hundreds of pages. I did like Jonas and thought him an interesting character and Danny was refreshingly brave, confident and honest but their story was just too short and relied too much on insta-love. Hopefully they'll appear in a sequel together someday and I'll be the first to click on the "Buy Me now" link.