To Trust A Stranger by Karen Robards 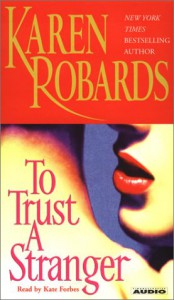 To Trust A Stranger starts out silly but it’s the good kind of silly that may actually make you smile if you’re in the right frame of mind. It was fun and just as I was settling in for a fluffy, light-hearted read the heroine went all bitchy on me. And it’s never pretty when that happens.

This is yet another book I only finished because it was an audiobook. 2 stars get knocked off because it irritated me so much on my already irritating commute to work. Now I'm bitchy too.

Things begin in a shady part of town in the wee hours of the night. Private Investigator Mac is out on a case decked out in full drag when he meets Julie who is decked out in only a sexy nighty and sneakers (hang in, there is a reason for this). Mac witnesses her hitting his vehicle, attempting to take off and then getting tossed into the street in front of him. For some reason (being half naked and beautiful, perhaps?), he takes pity on her and agrees to help her spy on her philandering hubby. She’s grateful for the help and feels safe with him because she thinks he is “Debbie” the cross-dresser. She assumes he’s gay because he puts on a good act and is toting around a floofy little poodle. Never mind the silly stereotypes. This is the good part and the least of your worries.

Mac is not gay, of course, and she figures it out soon enough. There is an obvious and heated attracted between them from the very beginning and it would’ve been really charming and sexy except there’s a little problem here. Julie is very much a married woman and up until this moment she hadn’t realized what a cheating, lying scum sucker she had married. She was blinded by Sid’s good looks, charm and his money. Julie is a former beauty queen who grew up poor and used her looks to marry above her station. She’s a trophy wife and just now realizing that Sid may want to trade her in for a newer model. I felt bad for Julie at this point and was warming up to her. The romance though was doomed from the beginning for me because I couldn’t shut off my brain. Wouldn’t this be a really hurtful realization for Julie and the worst possible time to start up a shiny new romance? Mac is great, there’s nothing wrong with him at all, but I couldn’t stop myself from thinking there was only lust and pain pulling her towards him and that she had a lot of crap to deal with before starting anew. Not to mention that there is a murderer after her too . . .

I lost my happy for this romance when all of this was revealed and never got it back. And then Julie went and devolved from a nice southern belle into a bit of a witch who vented all of her anger and frustration on Mac who was nothing but decent to her. That’s pretty much when the story lost me.

Parts of it were still funny even if unintentional and this most definitely wasn’t the worst book ever. Breasts were compared to oranges and cantaloupes and for some reason that never failed to crack me up and oh how very much I loved the crazy pants metaphors and cheesy descriptions! You don’t read this kind of stuff every day and when you’re listening on audio they really stand out. Here’s a small sampling:

"Yeah," Hinkle said, looking as nervous as a beetle in an aviary.”

“Her ears were ringing so badly she might as well have been Quasimodo in the belltower."

And my favorite comes from Mac:

"You walk into view, and I feel the earth move.”

Ooh, that's some sexy talk. I might be insulted on Julie’s behalf if she weren’t described as such a toothpick throughout the novel.

Still, I liked Mac and couldn’t figure out why he was so gaga over Julie. Don’t get me wrong; she was strong and stubborn and I loved the fact that was a fighter who even bit a guy’s nose at one point but she’s pretty rotten to Mac in the second half of the book. They have good chemistry but most men would’ve high tailed it out of there early on. He was calm, understanding and had a sense of humor. It’s only because of Mac and his naughty poodle that the book gets three stars.

The mystery is also disappointing. It culminates in a tangled mess of murderous shifty business that you can’t figure out until the author reveals it at the end in a big info dump. I freely admit that my mind was drifting and I may have missed things here and there but when the big reveals were exposed there was no emotional payoff whatsoever.

This is a three star read if there ever was one but if you’re looking for some laughs you’ll probably find a few here.

Narration Notes: The story is based in the south and narrator Laura Hicks gives the characters a lovely southern drawl. I enjoyed listening to them talk (especially Mac) but there was one particular scene that hurt my innocent ears. Instead of using a sultry tone during the big “O” scene the narrator chose to shout out the dialogue almost angrily which completely pulled me out of the scene. Boo!