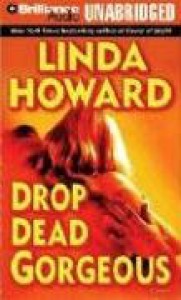 I just finished listening to the unabridged audio version of this book and though I haven't read a Linda Howard book in quite awhile I was quite surprised to find that her writing has changed so much. This book was a contemporary quasi-mystery with a whole bunch of hot sex between the empty headed heroine and her blinded by lust alpha cop fiance. Apparently there was a book about these two that came before this one but as the synopsis reads like an exact copy of this book I'm sure not going out of my way to search it out.

Blaire is a beautiful ex-cheerleader who owns a health club called "hot bods" (groan) but never seems to do any work there and is engaged to alpha policeman Wyatt. When someone tries to run Blaire down, starts making harassing calls and burns down her house Wyatt still thinks she's crying wolf and brushes off her concerns. I guess she was such a ditz in the earlier book that he has reasons for this? I don't know but it sure made him look like a dummy. What I do know is that she was so self-centered and egotistical that I wasn't sad at any point when these horrible things kept happening to her. She just gleefully went on a shopping spree when her house burned to the ground and didn't seem to care that everything she owned was gone, so why should I? I'm guessing this was supposed to be a light-hearted mystery similar to the Stephanie Plum books but Blaire was too much of a bubble head and her silly rants were just annoying. She needed to get married NOW because her biological clock is tick-tick-ticking and there's no way she's getting amniocentesis, they might poke the baby in the eye! What a total airhead. This stuff is supposed to be funny?

Though the reader was continually told how "alpha" Wyatt was supposed to be he must have gotten neutered somewhere along the line because he was quite tame. The big problem here was the first person writing from the point of view of Blaire. We don't get to know any of the characters and Blaire's head is so empty that most of the book is hard to take.

As for the mystery? There are virtually no suspects besides the idea that some woman must be crazed with jealousy because Blaire is so perfect, so beautiful, so rich. When the attempted killer is revealed it is lame and predictable and fits in perfectly with the rest of the book.