Agnes and the Hitman by Jennifer Crusie & Bob Mayer (audio) 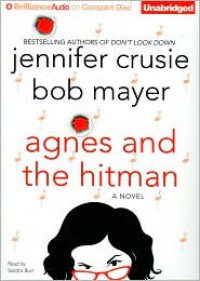 We all know a narrator can make or break an audiobook. What I didn’t know was that studio effects can do it too. Narrator Sandra Burr does a decent job with the characters here. I can tell who is who and that is always a bonus when a book contains too many zany characters. Burr’s narration of Agnes is a little too upbeat at times (Agnes is supposed to be cranky) but for the most part she is pretty spot on. The light-hearted tone definitely fits in well with the story. I don’t blame the narrator. I blame the person(s) who thought it might be a nifty idea to add an “echo chamber” effect to Agnes and Shane’s inner musings. This person deserves to get stabbed a little with one of Agnes’s meat forks. See, this echo effect makes it very difficult to hear what the characters are thinking when one is driving in a loud car. And Agnes thinks to herself quite often. Fortunately Shane doesn’t think much at all. If I turned up the volume my ears nearly blew off when the echo was shut off. This was more annoying than words can express and went on until the very end of the audio. I will forever be left to wonder if I missed out on some life-changing utterance. And surely I did, right?

So on to the actual story. Cranky Agnes is a food writer baking cupcakes and raspberry sauce when a punk busts into her home and points a gun at her doggie’s head. She grabs the pan of hot fruit and konks him over the head with it. Well, wouldn’t you? But apparently she does this sort of thing often because she has anger issues and even had to see a court appointment shrink because of it. Chaos ensues and the bad guy falls through a swinging door that leads to a basement without stairs. He presumably dies. No one really cares. Too bad for you, sucker.

This is the beginning of a series of madcap events in Agnes’s world. Worried for Agnes, an older friend sends his nephew, a handsome hit man named Shane, to watch over Agnes and keep her out of trouble. Even though Agnes is engaged to someone else, Shane basically moves in and puts the moves on Agnes. And she likes it. Her fiancé is aloof and refuses to spend time with her and Shane is hunkier. Later on we discover the reason the fiancé is MIA. It’s ridiculous but you just have to go with the flow here. Trouble continues to arrive in droves as Agnes attempts to plan a wedding for a friends’ daughter, more bad people get hit with frying pans and stabbed with forks, the wedding is continually sabotaged by the WWF’s Vickie Guerrero in a blond wig (not really but that’s who I pictured whenever the troublemaking Brenda appeared all screechy, bossy and annoying), more people die, flamingos honk and Shane and Agnes fall in lusty-love.

The premise this story is built upon, a sketchy mortgage and a hidden fortune, isn’t worth picking apart. It’s nutty and it’s supposed to be. I’ve read several Jennifer Crusie novels and loved them for their witty, intelligent characters and genuinely funny dialogue. Anyone But You? Oh, how I loved that book. But this book is different. She co-authored this with Bob Mayer and it doesn’t read like a typical Crusie novel. Having never read Mayer, I can only guess that his input perhaps was more on the madcap end of the spectrum? Disappointingly I didn’t find the book very funny or heartwarming. Parts of it were cute but mostly it was all over the place crazy. I liked Agnes who has some nicely sarcastic dialogue. But Shane? Shane is just sort of there. He’s a big, burly man good for offing the wrong people and helping Agnes control her temper with some angry sex but other than that there isn’t much to him. The two didn’t even get to interact very much because they were too busy reacting to the madness around them. It’s a shame because their banter, what little there was of it, was fun.

Shane: “What did Taylor want?”
Agnes: “He brought the health inspector out to shut down the wedding”
Shane : “Did you kill him?”
Agnes: “No. So how was your day? You kill anybody?” She stopped, realizing with horror that he might have.

In the end it was sadly “meh” and the mob and action stuff was terribly boring for me because I’m not interested in that stuff. My notes are scribbled with “will it never end?” Somewhere around disc 5 or 6 I was ready for it be over and done but it lingered on, finally sputtering to a long overdue conclusion on disc ten. And how was I paid back for my persistence, you ask? By a final visit to the echo chamber of death on the last track, forcing me to rewind no less than four times in a fruitless attempt to hear Agnes’s last thought. Alas, I will never know what it was because I became Cranky Reader and hit eject. If you know what she said to Shane, can you please post it in the comments?