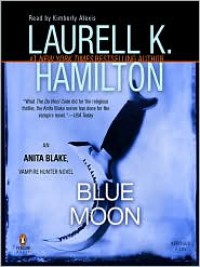 I reviewed Blue Moon when I read it many years ago but I can’t find a copy and can’t remember what my thoughts were. I’m sure I thought it was “one of the best books ever” because I was still a fangirl and it features a whole hell of a lot of Richard and back then I was a fangirl of him too. Now? Eh, I can take him or leave him but that’s only because the author turned him into an alpha-hole of the worst kind and replaced him with likes of Micah and the shifter crew. But that’s a rant for another day.

Today we focus on Blue Moon. It opens with a phone call where Anita Blake, Vampire Executioner, Necromancer and Protector of all things furry, defenseless and preternaturally sexy, learns that her ex-love (but not lover) Richard is in jail on rape charges. Then vampire lover boy Jean Claude shows up at her door wanting to do “the wicked dance” just one more time before she leaves town to save Richard. He’s jealous of Richard’s studliness and feeling insecure. She shoos him away, takes her vampire and shifter entourage and heads out to save the day. Jean Claude is barely a blip on the radar again during this book (I think he calls in once) because he is not allowed to travel to Master of the City vampire Colin’s territory, where Richard is being held, or all-out war will rage. Anita’s not allowed either but she says screw it and goes anyway. I love that about Anita. So, for you Jean Claude fans be warned because this is Richard’s book and Nathaniel’s book, and Jason, Asher and Damien’s too. But mostly this book is Richard’s turn with Anita. She saves his ass only to find out he’s been fooling around with all kinds of women (which contributed to his current troubles) in an attempt to replace her. They fight, as usual, but she doesn’t have much ground to stand on considering she left him for Jean Claude. She still lusts after Richard and what with all of the drama with the beasties and the evil big bad, a few corrupt police officers and the munin raising its horny head, Anita has her hands full.

I’m “rereading” this series on unabridged audio because I originally gave up on it somewhere after the meh “Micah” and need to refresh my memory if I have any hope of ever completing the series. Blue Moon is narrated by Kimberly Alexis who does a great job voicing the tough as nails, increasingly coldish Anita. Narrator Alexis is all business and it fits really well. She also does a decent job voicing everyone with the exception of Asher and Jean Claude, both who are given faux fancy French accents which make them sound too feminine for comfort. My ears bled a little whenever they were speaking. But I don’t blame the narrator; she did the best she could with the source material. Some of the other characters sound too similar but I could usually figure out who was speaking pretty quickly.

I really enjoyed this reread. I wasn’t sure I would but it held up well and kept my attention throughout. The characters dealt with a lot of deep crap, Anita had to work through some of her issues and questioned herself and her values. I liked this Anita. She cares about the people she keeps acquiring and makes tough calls to keep them safe. If she’s a bit bitchy, hell I would be too. This book has some incredibly dark edges. I always forget about that and I appreciate it. I don’t like the sugar-coating too many PNR’s have these days. I have to hand it to Hamilton, she does not flinch while inflicting damage to the innocents in this book. Now on to the next one!