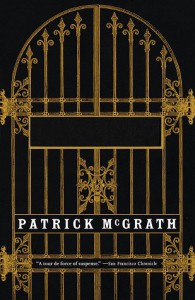 This has been sitting on the bottom of a huge pile of books in my bedroom that topples over every time one of my dogs flops down for a nap. I'm getting sick of picking them up and will read them from the bottom up. It's like a Survivor Challenge as I wiggle out the bottom book without causing the whole lot to topple upon my head. I bought it five years ago at a library sale according to the withdrawn library stamp. Shameful.

Psychiatrist Peter Cleave tells a supposedly sordid tale of a former patient, love affairs gone terribly wrong, sexual obsession and madness but alas he’s such a boring fellow the story has no emotional appeal, no sense of drama, and no interesting tidbits to savor and drool over. He skims over the good stuff and me, being the fool I am, continued to read waiting for my interest to become engaged and hoping to feel something for these screwed up people. Alas, I remain a fool.

Doc Peter works in an asylum for the criminally insane which happens to be within walking distance of the home of their newly hired superintendent, his beautiful but bored housewife Stella and their young son Charlie. When an inmate named Edgar is hired on to do some work on their grounds Stella gets all hot and bothered by his sweltering looks and big brawny chest and begins to romanticize his criminal history. She starts to believe he only murdered his ex love because he loved her so very deeply. Awwww, isn't that the sweetest? So I assumed bad things were going to happen and was looking forward to an emotionally disturbing read about a dumb housewife and a hunky headcase but I was so bored I could barely get through it.

This could have been an interesting gothic-y tale but the problem for me was Peter’s first person narration. It makes the book feel a bit stuffy and distances me from the people he’s prattling on and on about. Because the book is told entirely from Peter’s point of view or from snippets he gleaned from interviews with Edgar and Stella, who withheld all interesting tidbits it seems, we are only told the unexciting parts of the story. Peter has no imagination and doesn’t fill in the blanks very well either. Damn it all. I’m not a perv, really I’m not, but when a book jacket touts “passion” and “strange love” I expect something slightly exciting and not a whole bunch of boring accounts of day to day strolls through the garden, tedious conversations and a painfully slow and uninteresting descent into madness.

I waded through countless pages waiting for something interesting to happen and honestly, for me, it never freaking did. Even when tragedy occurs I felt so distanced from the characters that there was no emotional reaction from me as a reader. And when the last revelation made by Peter is revealed I found it so ridiculously unbelievable that I wanted to scream. Finally, an emotional reaction but for all of the wrong reasons! I regret wasting several hours struggling through this book and can’t recommend it unless you’re into really boring melodramas.

Gothic Barks Horror Reviews Barks Reviews wake me when its over