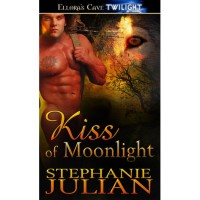 Kiss of Moonlight appears to be the start of a new series of beautiful magical beings, mythical gods and shape shifters with their own rules and foreign terms. Fortunately, there is a helpful glossary up front full of foreign words and their definitions. Unfortunately it was missing the hero’s favorite oath: Vaffanculo. He says it often and I was never quite sure if it meant “fuck”, “bollocks” or “banana-pants”. I went with the banana-pants*, because, why wouldn't I?

“Vaffanculo, he was almost forty “

“Vaffanculo, he was a clueless bastard.”

Shifter Kyle has managed to make it late into his 30’s without falling prey to love and giving up his freedom to a woman. He came close once and still shares a tight bond with his ex-lover and her husband Dan who together all share their teenage daughter Cat. Cat adores her two dads but worries about Kyle being lonesome and nudges him, none too gently, to find a mate.

When Cat discovers a beautiful, young woman has moved into a house just outside their borders she shifts into puppy form and befriends the emotionally and physically wounded woman and later pleads with Kyle to check in on her. Cat knows exactly what she’s doing even if love-shy Kyle hasn’t a clue. Kyle shifts, checks out the scene and is entranced by Tamra’s beauty and honesty as she confides in him her darkest secrets, thinking he’s nothing but a harmless dog. It’s love at first sight for Kyle who will now do everything in his power to keep Tamra safe.

The characterization at the start of this story reeled me in. Cat is adorable, funny and knows exactly how to work Kyle to get exactly what she wants. Kyle is an assassin for his King but is portrayed as an open, caring, masculine guy secure in his skin and funny and kind in his thoughts. After his bossy daughter has forced him to do something he doesn’t get angry, he just does want what she wants knowing he’s whipped.

“Yep, someone should just take his balls and hang ‘em in a closet somewhere.”

Tamra has suffered horribly and is recovering from a vicious kidnapping and rape that left her hurt but didn’t break her spirit. She’s a survivor and her sexual feelings towards Kyle, feelings she wasn’t sure she’d be able to experience again, empower her and she revels in them becoming the aggressor when Kyle tries to do the right thing by keeping his hands off her. This all worked well and the sexual heat between the two was off the charts. Their age difference of 15 years and the fact that Kyle has some secrets adds enough conflict to their romance and was enough for me but then the author switches gears and this is where the book starts to falter. She sets up what I believe is going to be an ongoing suspense thread in future books and didn’t answer some very important questions when this book ended. Tamra also pulls a to-stupid-to-live stunt that served no purpose but to annoy and frustrate both me and poor Kyle. Vaffanculo!

Overall I give this one a three. The romance and characterization was great but the non-resolution of the suspense threads took away some of the fun. I’ll be interested to see these people again and, hopefully, get some closure in future installments!

Just in case you were wondering:

*Banana-pants: A male who is graced with the unusual gift of a curved erection. Dreamed of by many, accomplished by few.