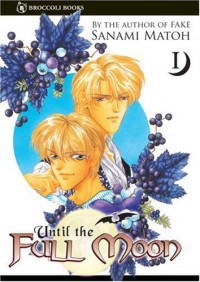 While hunting down the manga series "Fake" I stumbled across this manga written by the same author. Fake, as silly as it is sometimes, is far superior so I'd recommend searching that out instead.

This one has a paranormal bent featuring werewolves, vampires and pretty young men. Sounded perfectly lovely to me. But then I read it.

Marlo is the child of a werewolf and a vampire and recently started changing during the full moon. But instead of turning into a wolf, as expected, he changes gender. His parents enlist the help of an old family friend whose rakish son David had an innocent but more than friends type of relationship with Marlo when they were young. It's been ten years since they've been together and Marlo would really prefer to keep his "problem" a secret from David.

It doesn't take long for David to see first hand what is going on with Marlo and he becomes painfully attracted to the female form of Marlo. But he doesn't' seem to mind the male form all that much either. The parents of these two young men decide that a cure is unlikely and decide they should marry. It's all going along too swimmingly so some conflict is thrown in to stretch it out a bit in the way of an old girlfriend and two pesky friends. I would have much rather have seen this space used to explore the Marlo and David dynamic and Marlo's feelings about changing gender but it is what it is.

After the silly ex and friend issues are resolved the book then steps back in time where we see a past version of Marlo and David living a happy ever after. What. The. Hell? I guess this little rendezvous was there to show us dummies that the two have always belonged together all soul-mate-like? Groan. I don't know. What I do know is that it was all a little strange and not very cohesive and the relationship wasn't interesting because it wasn't explored much at all. Though David loves Marlo regardless of which form he's in (yeah David), Marlo won't let David near him unless he's a girl which is only one day a month. Again, I beg to know, what the hell is the point? Gender issue isn't explored, feelings aren't explored, nothing is fleshed out. And don't even get me started on the werewolf/vampire angle because it's pointless too.
Tweet