The Left Hand of Calvus by L.A. Witt 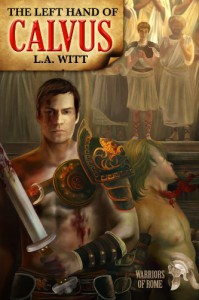 Dominus Saevius is a gladiator just three fights away from freedom when he is sold as a bodyguard to Pompeian politician Junius Calvus Laurea. Saevius is not thrilled with this turn of events but is relieved he will no longer have to risk his life in the arena. Or so he thinks. He soon learns he was purchased under false pretenses when he is thrust into a far more dangerous situation.

Calvus thinks his wife is cheating on him with a gladiator and he won’t stand for it. He orders Saevius to infiltrate and train as a gladiator in the group his wife is rumored to visit. I didn’t know this, but it seems that it was commonplace for wealthy women to find sexual satisfaction with a gladiator or four back in ancient Rome. Not only were the gladiators forced into the ring to fight for their lives but they were also prostituted out by their owner, the “lanista”. Saevius has always done his duty even though he prefers men so his re-entry into another slavery contract is particularly disheartening. If he gets caught spying he will be slain but if he doesn’t co-operate with Calvus he’ll likely be slain anyway. So he does what he must. Then things get even more complicated for Saevius.

His new lanista called Drusus is rumored to be a madman who kills for the pleasure of it. Drusus takes a special interest in Saevius and asks him to spy for him because he feels something fishy is afoot among his gladiators. This pulls him even further into the intrigue mess. But even more troubling for Saevius is the fact that he finds himself inexplicably attracted in the sexual way to Drusus. “He’s like a god strolling among those who think they’re gods.” And Drusus seems to return those feelings.

Riptide publishes some unique work that always draws me to their titles. The few that I have read focus on the darker edges of sex and usually feature very complicated relationships. This one is no exception but you should know that this story isn’t a sexual fantasy and there isn’t much in the way of a romance. It’s more of an action intrigue, danger filled look into the life of a gladiator. Truly fascinating, even for one such as me who isn’t normally into this sort of thing. The characters and plot are intricate and complicated and though Drusus and Saevius are drawn to each other there isn’t a lot of room in this story for romance. It ends at the very beginning of a very complicated love story that never progresses further than a few sexy kisses and some stealthy longing looks. I would love to read a sequel some day because there is a huge game changer of a reveal that comes along (and NO I’m not telling) and I’d like to see how the characters worked it all out. But sequel or no, this review is based on what I just read and it feels a little too rushed at the end and a wee bit unfinished.