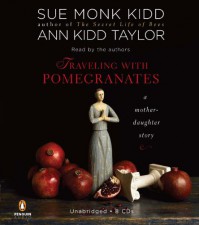 I picked this up hoping to experience a trip to Greece through the two authors but instead I'm finding that it is more of navel gazing piece. Sue Monk Kidd is turning fifty and having a difficult time coming to terms with the back end of her life while her daughter Ann is suffering from depression because she wasn't accepted into a program to study Greek history and doesn't know what to do with her life. The two have a conflict free but somewhat distant relationship, they don't connect closely and keep their dreams and worries to themselves.

Sue's portion of the book spends a large amount of time delving into Greek mythology and feminism which has become repetitive and dull already (only on disc 2 here) when listening to the audio. Ann's chapters are more down to earth but her problems, mainly the fact that she wasn't accepted into the graduate school of her choice, seem rather minor in the grand scheme of things. It seems a great shame that she's in Greece and not really enjoying the experience because she's too busy being all glum. Someone hand her some Prozac, the poor traumatized child. Such is the curse of the young and privileged.

These two have each other, wealth, their health and the freedom to travel for months and months. They haven't a clue as to how tough life can be for most people. It reminds me far too much of Eat, Pray, Love which I despised because it was another "woe is me, my life sooo hard" type of book penned by a spoiled writer with an Eeyore complex.

I'm just grateful I picked this up from the library and didn't contribute to the author's next depressing trip to wherever . . .

Later: This book was either irritating or boring me so I threw in the towel somewhere on disk 2.