A Knight In Cowboy Boots by Suzie Quint 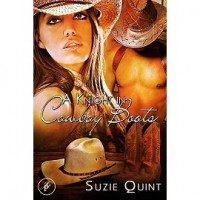 After reading the initial setup of A Knight In Cowboy Boots I was expecting yet another sex filled, superficial romp. Maddie is on the run from a killer, with her deceased sister’s baby in tow, and needs to burn off some steam. She meets Zach in a bar. He’s been out on an oil rig for months, has an enormous ding dong and he’s burning to put it to good use. Not that there’s anything at all wrong with that! But things don’t go exactly as they plan, a comedy of errors occurs, and that’s when I was hooked. What follows is a sexy and solid romance with great characterization, some emotional scenes that moved me and just enough action to keep things interesting while never forgetting this is a love story.

I’m not going to go into minute detail here because this is a shorter romance. Basically Maddie has landed in Texas with the baby, a new identity and is lonely and grieving when she comes across Zach, all tall, dark and hunky. They flirt but what she really wants is to hear his drawl which reminds her of her lost love. But then Zack boldly brushes his lips against hers and says:

“My daddy says sometimes it’s better to ask for forgiveness than for permission.”

She’s smitten and overwhelmed by him and honestly so was I. He was so damn charming and warm from beginning to end. He comes from a large close-knit family and though they aren’t all romance novel perfect (thank you author, for that), they behave like a real family and you can feel the love even when they’re cussing each other out. Their presence adds to the warmth and tension in the book and I came to care about quite a few of them, instead of being irritated by the intrusion of too many secondary characters (which is what usually happen because I’m impatient and bore easily).

The suspense plot does require a smidge of suspension of disbelieve and you’ll need to be able to forgive a bit of meddlesome snooping by Zach but I really enjoyed both of these characters and the way they interacted with each other. Their sexual connection was intense but there was so much more here. He has a terrific sense of humor and a terribly romantic side and she’s got so much baggage and is so desperate to do the right thing that you just want to hug her.

A Knight In Cowboy Boots is a sexy-sweet read with big hearted characters I cared about. It was definitely worth my time and is easy to recommend.