The Kult by Shaun Jeffrey 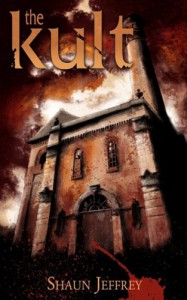 Cleaning up my old reviews. Sorry if you've seen this before.

The Kult is an action-packed serial killer novel with several twists and turns that were atypical of the genre.

When it begins “the Oracle” is planning his next murder and we get a little insight into his creepy head. He’s a guy bent on revenge, who meticulously plans his kills for the most impact, targeting the disfigured, the young, and the old. He turns his victims into pieces of art, dismembering them in various nasty and creative ways and leaves only pictures and clues behind for the police to decipher.

Detective Prosper Snow is leading the case, along with his newbie partner Jill Jones. He’s stumped regarding the clues but determined to find the sick SOB before he kills again. All seems like a standard serial killer novel, eh? But then Prosper receives an email and we begin to learn about “The Kult” and his involvement in it and realize that Prosper is keeping some pretty big secrets and that’s what sets this story apart and kept me reading until the very end. Don’t worry though I’m not going to spoil them for you.

This was a very well-crafted story that didn’t wallow too long in the gore for the super squeamish. It also featured some very imperfect characters which is always a good thing. I have to admit though, that Prosper as a character was hard to get behind. He’s carrying some major guilt which would put anyone on edge BUT he is so unpleasant and has this awful dismissive tone with his wife and some of his co-workers that it made it difficult for me to feel any sympathy for him. He’s stressed yeah, I get it, but that doesn’t give him an excuse to be a dick to the people closest to him.

I can easily recommend this to any fan of serial killer novels. Everything came together in a surprising way that made a lot of sense. And there’s one memorable scene with “the hatchet man” that was grisly, realistic and a bit hilarious (well, to me anyway). It reminded me a bit of the unexpected violence and depravity performed by the tiny women in Out by Natsuo Kirino. Great stuff in both, but only if you’re a bit twisted.