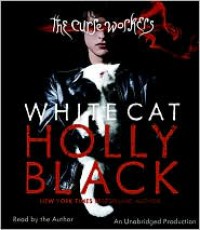 An older review. Still working on the GR conversion project.

White Cat is a young adult fantasy, the first in a series, but it’s not the cookie-cutter standard YA novel. Black usually fills her stories with a somewhat edgier cast of characters that can put some people off. These folks have rough edges/backgrounds/thoughts and flaws that make them come alive whether you embrace them or are disgusted by them. I enjoy that most about Black’s writing White Cat isn’t an exception.

Cassel is the narrator. He is an outcast in his own family because he is not a talented magic worker like the rest of them. He believes he killed his best friend Lilah and that his family covered it up. But as you’re getting the story from Cassel’s point of view you may soon jump to the same conclusions I did; there’s no way this sweet guilt laden guy could’ve done it. The book opens with a nearly naked Cassel dreaming about a tongue stealing cat and sleepwalking atop the roof of his boarding school. The incident gets him thrown out of school and he’s stuck decluttering his childhood home with his Granddad. He continues to dream of the white cat who says cryptic things like:

“I need your help. A curse was placed on me. A curse that only you can break.”

The cat haunts him both in dreams and reality and as the mysteries surrounding Cassel’s life are revealed his life is turned upside down.

I’m not going to give anything of the plot away but will say your enjoyment of this story will probably be based on your willingness to accept imperfect characters. Cassel runs cons, it’s how he makes his money while at college, and he’s good at it. His family members are all a bunch of criminals working their magic (which is banned) to benefit themselves, his mom is a jailbird and they raise Cassel to be an expert thief and master of the con. It was what he knew, so I could accept it. He has a sense of humor and decency about him despite his situation and I enjoyed seeing the world from his point of view.

I guessed at two of the big reveals early on and though the book ends on a melancholy note it does answer a lot of questions and the secondary characters stayed true to their somewhat shady selves, like them or loathe them. I found it all interesting, never boring and will jump right into “Red Glove” next.

Barks Reviews YA Worth Reading