One Foot in the Grave by Jeaniene Frost 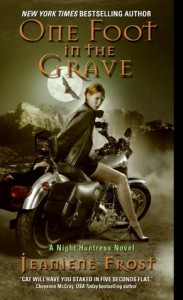 Another lost little review that is part my GR Cleanup Project.

I read this on audio. I am stressed and lazy so this is not going to be a review, just a spewing of things that are rattling around in my head. The same narrator reads this novel who read the 1st one and manages to make Bones sound like a cartoon character. It has grown on me and I like it ;) I also liked the humor, the chemistry, and many of the new characters with the exception of the bland Noah and the team member secretly crushing on Cat (his name has already escaped me). I didn't like the fact that four years had passed (that threw me for a bit), I was annoyed again that Cat still puts up with crap from her mom who I hate with an intensity normally reserved for people who hate dogs and that rude guy who was crushing on Cat and accusing her of terrible things. She should've stabbed him with a stake and put him out of his misery early on. The butt stuff was boring, seriously. I don't know what that says about me, probably nothing good. That also goes for most of the rest of the overblown sex. Maybe I'm just burned out but it just seemed so over-the-top "ooooh, ahhhh, bite me again, harder, never stop" blah, blah, blah . . . I started to tune it out. Still, a Cat and Bones book is leagues above a lot of the other PNR stuff out there (Galenorn, cough) thus the 4 stars.