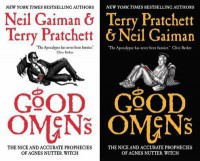 Good Omens is a zany take on the end of the world (as well all know it). The anti-christ is born but due to a mix-up of babies due largely in part to the ineptitude of the angel and demon in charge of Armageddon (who rather fancy the world as it is), things go a bit askew and comedy ensues.

Most everyone has read this but me so I’m not going to go all long-windy with the plot synopsis. I listened to this on audio and though the narrator does a spiffy job it took me a quite a bit of time to get into the groove of the story. If I’m being completely honest, I had to re-listen to disc one twice in order to catch everything because my mind kept drifting away. And while I’m being honest, I’ll go ahead and admit that the second listen was a bit of a chore too. For some reason I can’t pinpoint, I just couldn’t stay focused. If this were a novel this is where I would’ve put it aside for good but I made it all the way to disc five before throwing in the towel.

There are many characters here and I lost my way somewhere around the point where the book starts to focus on the kids. Many folks think this book was a laugh riot from the get go but I found it a wee bit dry and dare I say almost boring? I saw the bits where it should’ve been funny, but it didn’t work for me. I’m afraid my sense of humor has gone on vacation without me again.

I typically enjoy Gaiman’s writing but the two Terry Pratchett novels I’ve tried to listen to on audio were DNF’s. Sadly, this one is a DNF as well. My 3 star is only for the content that I read (roughly 1/2 the book).